SciTech Tuesday: Plans for The Gadget

In early 1945 the Manhattan Project had made great progress, but its promise to provide bombs by August of the same year was very optimistic.

In simplest terms, an atomic bomb works by creating an uncontrolled nuclear reaction in radioactive materials like 238Ur or 239Pu. The project, at great effort and expense, was producing sufficient quantities of these isotopes, but the problem of how to build a bomb that created a critical mass of them at detonation and not before had yet to be solved.

A gun mechanism, in which a small amount of material was shot into a larger amount of the same material, was originally planned for use. It ended up being the trigger for the 238Ur bomb that was used on Hiroshima. 239Pu was easier to produce in large quantities for a bomb than 238Ur, but it would take more to bring it to critical mass. Seth Neddermeyer showed the teams at Los Alamos that as it began to undergo fission, a mass of 239Pu would expand and become less dense, thus not achieving critical mass. He suggested a different trigger mechanism—implosion. The idea was that several smaller masses of 239Pu arranged around a hollow core would be pushed together quickly by explosions surrounding them. Working out the right dynamics to find a configuration and triggering mechanism took almost a year of experimentation. John von Neumann, who contributed mathematical work to optimize the size and placement of charges, and Edward Teller, who figured out how to change the density of the plutonium metal to achieve critical mass, were prominent members of the implosion team.

Another challenge of the plutonium bomb was that the plutonium samples they had contained a lot of 240Pu. This isotope spontaneously undergoes fission at a high rate, and might prevent a large chain reaction. This also meant that implosion would be necessary.

The complexity of the implosion mechanism required the scientists and engineers working on that part of the project to conduct many experiments. Most of these (called the RaLa tests) used 140Lanthanum because it was less dangerous and expensive. Eventually they also tested what we would call today a ‘dirty bomb.’ Using waste products from reactors, they detonated a test bomb to see the results.

All this work testing the bomb mechanics culminated in the Trinity Test in July 1945. This bomb was code-named The Gadget. At first Groves and Oppenheimer were concerned it might not work, so they built a very expensive metal containment chamber in which they planned to detonate the bomb. This would allow them to recover the 239Pu which had cost so much time and money to isolate. However, by the time they actually conducted the test they were confident it would work, having been through over 240 RaLa tests.

After the Trinity Test, the path was clear to delivery of the bombs on schedule.

This is the last week to apply for Real World Science, a weeklong residential seminar to learn how to teach STEM with history. 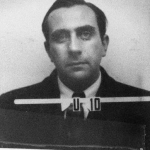 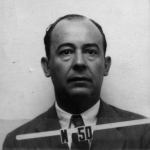 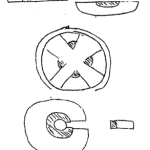 notes from 1942 meeting at Los Alamos on bomb mechanisms 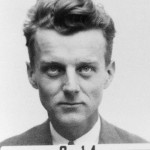 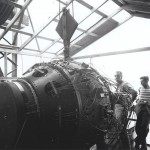 The Gadget-the bomb made for testing at Trinity-loaded into the tower and ready to go.