Just after midnight on March 9th 1945, residents of Tokyo heard the rumble of over 300 B-29s approaching. In a short time the bombers dropped their payloads of E-46 cluster bombs. This was Operation Meetinghouse, 70 years ago.

Earlier raids, including the Doolittle Raid, had not been very effective, so the March bombing of Tokyo was planned differently. Instead of high altitude strikes with conventional bombs, this raid used the B-29s at low altitude (5,000-9,000 ft) and at night, to take advantage of weaknesses in air defense, and to better target the cluster bombs.

Each of the cluster bombs held 38 M-69 bomblets, which the cluster bomb released at about 2,000 ft. These M-69s were pipes, filled with explosives, cloth, and a jelled gasoline called Napalm. The M-69s ignited a few seconds after landing, and sprayed globs of ignited fuel. These devices had been used earlier in Dresden.

For the March 9th raid on Tokyo, the initial wave of about 225 bombers targeted a part of the city that held working class residents who worked in manufacturing. These neighborhoods included the port and docks. The pattern of targets was made to take the shape of an X. This way the second wave of bombers could use the flames as a target. The bombing was meant to overwhelm firefighting abilities and cause a great conflagration.

From that perspective, it was a success. an area of almost 16 square miles was completely destroyed in a huge fire that burned at 1,000oF. Most of the structures in the targeted area were older, traditional buildings made of wood, and so they were vulnerable to fire. Most estimates put deaths at 100,000, injuries at 1 million, and homeless at 1 million. The industrial output of Tokyo was cut in half.

These estimates of casualties are likely very low. The population density of that part of Tokyo was at least 100,000 per square mile. This means that over 1.5 million people lived in the completely burned area, where the bombs and fire came and passed very quickly. Even at the low estimates, Operation Meetinghouse killed more people than any other single raid in WWII, including Dresden, and the nuclear detonations at Hiroshima and Nagasaki.

Napalm was developed in 1942 by chemists at Harvard University. Early incendiaries used plant latex, which was in short supply during the war. It included phosphorus, so that it would burn for a long time and be resistant to extinguishers. Napalm is made by mixing a dry brown powder with gasoline, at which point it gets sticky and extremely flammable. It was first tested on the Harvard University football field. 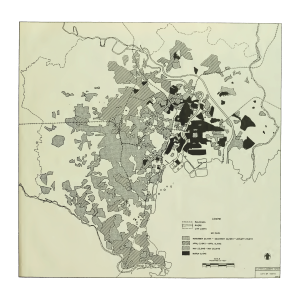 This is a map made by occupying US Military of bombed portions of Tokyo in 1947.