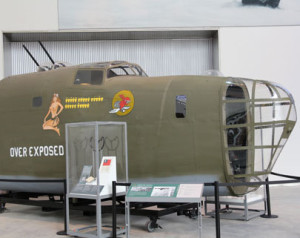 B-24 Liberator and Norden Bombsight

The United States produced three heavy bombers in WWII, one of which was the B-24 Liberator. The B-24 has the distinction of being the most produced US combat aircraft of all time – more than 18,000 by the end of the war. The Liberator was a powerful symbol of US industrial might, armed with 10 .50-caliber machine guns and carrying an 8,000 pound bomb load.

On the floor of the US Freedom Pavilion: The Boeing Center sits the impressive B-24 Bomber and Norden Bombsight exhibit, made possible through a generous gift by Bill and Dina Riviere. The exhibit honors Bill’s father, First Lt. Clarence Riviere, highlighting his bravery as a B-24 bombardier in the South Pacific.

The Norden bombsight could be found in many medium and heavy bomber aircraft in the U.S. Army Air Force during World War II. It was such a closely guarded piece of technology that bombardiers had to swear an oath to protect the secrets of the device by destroying it before letting it fall into enemy hands, even at the cost of their own lives. The USAAF wartime claims of the Norden being able to place a bomb in a pickle barrel at 20,000 feet were greatly exaggerated. In reality, the Norden bombsight was a complex machine consisting of many gearwheels and ball bearings, prone to produce inaccuracies when not in proper calibration, which was often the result of the aircraft’s turbulent journey to the target. 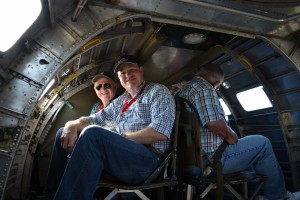 The Rivieres, who were first introduced by a mutual friend at a holiday party in December of 2000, have been involved with the Museum since its creation. Bill attended the opening ceremony with his father, while Dina was nearby watching the parade of veterans on Poydras Street. She remembers that the parade was “much more emotional than you thought it would be.”

Bill knew that the creation of the Museum would be “special due to the personnel involved,” particularly founders Stephen Ambrose and Nick Mueller, as well as some of the influential trustees they each knew in the business community. The Rivieres became charter members soon after the opening and attended many functions at the Museum. It was at one of these events, the annual Victory Ball, where Bill met Stephen Watson, now the Museum’s Executive Vice President. The two quickly hit it off when they discovered they were both alumni of Nicholls State University. 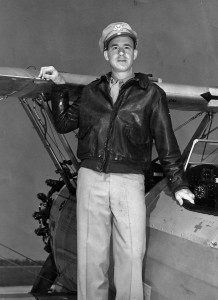 Riviere questioned Watson about the fact that there was no Norden bombsight on display in the Museum which, according to Bill’s father, was “the thing that won the war.” Watson explained that there were three in Collections behind the scenes, but that the Museum was interested in displaying a strategic bombing exhibit in the upcoming Boeing Center. This sparked a brainstorming venture. Watson worked with Riviere to gather information on his father’s combat record in the Pacific so that his personal history could be on display with the equipment he was so proud of.

Riviere states that his father rarely discussed the war when he grew up, and only started to open up about his role in the 1990s, when his grandchildren began to ask questions. When Lt. Riviere passed away, Bill and Dina went on a hunt for information, searching through three old suitcases that the Lt. had kept in the attic. They discovered a wealth of information.  Lt. Riviere had kept every document he had received during his time in the Pacific, from his flight log to transfer requests to the arrival of a new pair of socks. Included in the suitcases were many photos of Lt. Riviere in uniform, none of which Bill had seen before, as well as a letter written by his commander recommending Lt. Riviere for the Silver Star.

The B-24 exhibit and Norden bombsight exhibit opened in 2014 with a commemorative ceremony on what would have been Lt. Riviere’s 95th birthday.  Bill notes that his fondest memory of the Museum so far was having his mother present at the dedication of the exhibit. Many family members from Thibodaux and surrounding areas came in for the celebration. Dina said that the most rewarding aspect of their gift, and why they continue to give, is because of the inspiration the Museum gives to veterans. She believes that, because of the institution, there is “much more open dialogue” about the war and that it is “rewarding to see that shared with future generations.” 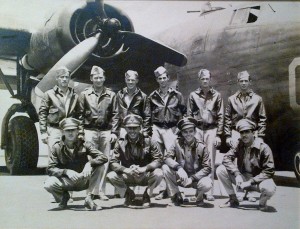 Bill went on to say that “to donate is one thing, but the sacrifice of those who served is unimaginable.” He states that, even living with someone who participated, it is hard to grasp the sacrifice and the amount of human resources the war effort took. The Rivieres choose to donate so that these stories are never lost. They agree that, “this Museum is a mere tribute to the sacrifices that those in the war effort gave. And we need to do all we can to preserve this for generations to come.”

The Museum is so fortunate to have the encouragement and dedication of Bill and Dina Riviere. We are most grateful for their ongoing support of our programs and capital expansion.