SciTech-Tuesday: Manhattan’s Moles–espionage in the race to build atomic weapons

During the Manhattan Project, the military and intelligence officials worked hard to protect the secrecy of the effort. With 400,000 employees, and 600 contracting companies, this was a big challenge. Overall, many aspects of the security effort were successful. The vast majority of employees had no idea what they were working on, and very few people had knowledge of more than the small portion of the effort in which they were involved. Undercover investigators across the country posed as hotel employees, electricians, and exterminators to monitor employees and gather information.

Most of the focus of investigation was on persons of German descent or Nazi sympathizers, and in this the security effort made a grave error. Although there were attempts by German infiltrators to sabotage power plants supplying project sites, there was little penetration by the Nazis of the Manhattan project.

Soviet espionage was much more effective.

The Soviet effort against Hitler’s Empire cost many millions of lives, and strained a young and relatively weak economy. Stalin had a personal trust in Churchill and Roosevelt, but the relationship between the allies was based on common interests and fears, not common principles and values. When Roosevelt died, any trust Stalin had for the US went to the grave with him. When Churchill was replaced as Prime Minister in England, his allies in the West were gone.

Movies like Mission to Moscow and Song of Russia portrayed Soviet society favorably, because they were designed to as a form of propaganda to support the war effort. Citizens and institutions in the US and UK were generally distrustful of communists and Soviets in particular.

And yet there was an undercurrent of pro-communism in American and English society as well. Some people felt strongly, especially in the context of the Great Depression, that capitalism had failed ordinary people. Others, who may not have understood all the technical details of the atomic weapons being developed, did see that unilateral possession of such dangerous tools could create instability and usher in a new era of dangerous imperialism. 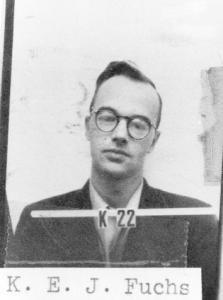 Klaus Fuchs was a physicist in the Manhattan Project. He had fled Germany in the 1930s, and attended university in Bristol and Edinburgh, before being briefly detained as a German National at the start of the war. In 1942 he became a British citizen, but had already volunteered his services as a spy to the Soviet embassy. While working at Los Alamos on the bomb construction and mechanism, he passed information on to Moscow. After the war he returned to England and continued to work in nuclear arms development, and passed to the Soviets information about the hydrogen bomb. Intelligence in the US and UK managed to decode Soviet transmissions, and gathered information using them(called the Venona cables). This intelligence led to the arrest, conviction, and later deportation of Fuchs to East Germany.

Theodore Hall’s history is a little more surprising. His family suffered from deprivation and anti-Semitism in the Great Depression (thus he changed his family name Holtzberg). He entered Harvard young as a prodigy, and graduated at 18, and by 19 was the youngest scientist in the Manhattan Project. He was a Marxist, and while working on nuclear technology became very concerned about its dangers to society. While on leave in New York in 1944, Hall contacted the Soviets and promised to keep them informed of developments at Los Alamos. He used coded references to poems from Walt Whitman to communicate with another spy, Harry Gold. Gold couldn’t identify Hall, and so Hall continued his career as a scientist unhindered. It wasn’t until the release of documents after the fall of the Soviet Republic that his role was uncovered.

Harry Gold was a chemist who had been communicating industrial secrets to the Soviets since 1935. When FBI investigators found a classified map of Los Alamos in his apartment he confessed and implicated David Greenglass. 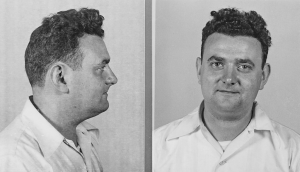 David Greenglass in his mugshot.

David Greenglass was an Army draftee working at Los Alamos as a machinist. He passed on drawings of the implosion trigger mechanism, stuffing them in a Kleenex box for a courier to pick up. Greenglass was the brother-in-law of Julius Rosenberg.

Julius Rosenberg was one of the most famous spies of US history. He worked at the US Army Signal Corps Engineering Labs at Fort Monmouth, where research on radar and communications was conducted. He was fired after the Army discovered he had formerly been a member of the Communist Party.

A natty Rosenberg at his arrest.

Although both Julius and his wife were convicted of espionage for stealing nuclear secrets, there is no evidence today that Ethel was involved at all. Documents released after the fall of the Soviet Union indicate that Julius passed information about radar and electronics to the Soviets. The Rosenbergs were executed by electrocution in 1953. The judge sentencing them, blamed the Korean War on them.

It’s not quite the Bourne series, but these individual stories hold fascinating details (a Kleenex box? Leaves of Grass?). They also seem to belie the idea that spies act for mercenary purposes, or national allegiance. Most of these individuals acted because of some principles or values that crossed national boundaries.

All images from Wikimedia Commons

It’s not Top Secret–The Real World Science Summer Teacher Seminar is bringing 28 teachers to the museum for a week to learn how to connect STEM and History for student success.