In our museum’s collection (2006.232) is a rusty barrel which spent decades at the bottom of a cold Norwegian lake before being recovered and donated in a ceremony at the Inaugural International Conference on World War II. 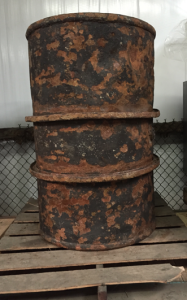 What makes this rusty barrel special, and how did it end up at the bottom of that lake? It held heavy water, and was being transported to Germany from a plant in occupied Norway, when the boat carrying it was sunk by resistance forces supported by the allies.

What is heavy water, and why is it important enough for it to be an object of sabotage? Let’s examine a timely analogy.

The same is true of chemical elements. Elements are arranged in the periodic table according to their structure. What makes one element different from others is the number of protons in its nucleus. A quick examination of a periodic table of the elements shows that while there are only 7 days of the week, there are 118 elements. But just like some Tuesdays are special, some atoms of an element are special too.

For example, let’s talk about uranium. Uranium is an element with a very large nucleus. It has 92 protons in its nucleus. All atoms with 92 protons are uranium. Atoms will normally have as many electrons as protons, but they can gain or lose electrons and still be the same elements (atoms that have gained or lost electrons have a charge and are called ions). The last component of the structure of an atom is a neutron. Neutrons are in the nucleus with the protons. In elements the number of neutrons tends to increase along with the number of protons. Uranium usually has 143 neutrons (99.3% of the time). Sometimes it has 146 neutrons (0.7% of the time). The atomic weight of an atom is equal to the number of neutrons and protons it has, so these two forms of uranium have atomic weights of 235 and 238, respectively. Forms of elements that differ in the number of neutrons in their nucleus are called isotopes. Isotopes of an element are indicated by their atomic weight. So those two elements of uranium are called 235U and 238U.

Many elements have isotopes. Carbon normally has an atomic weight of 12 (12C), but has an isotope of 14C (used in radiocarbon dating). Oxygen is typically in the form of 16O but an isotope 18O is used in paleoclimatology to estimate past temperatures. Some isotopes are radioactive, like 14C and 238U, but others like 18O are not. Radioactive isotopes break down into other elements and give off energy at a constant rate (14C has a half life of 5730 years, and 238U of 4.5 billion years). Not all radioactive isotopes are dangerous (14C gives off very little energy, and 238U gives off a whole lot).

So you could say that Mardi Gras is an isotope of Tuesdays. It has more mass than most Tuesdays, primarily because of the extra king cake and beads. Perhaps we should designate it as Mardi GrasTuesday.

The German effort to develop nuclear weapons used a nuclear reactor design that required heavy water. A nuclear reactor uses a sustained and controlled nuclear chain reaction. To control the reaction the reactor has to have a substance that absorbs neutrons. The reactors also produce a great deal of heat and so require a coolant (nuclear electrical generation plants use the heat from the reactor to make steam). In the reactors designed by German scientists in the 1940s heavy water was used to absorb neutrons and cool the reactor. The reactors designed by Enrico Fermi and other scientists in the Manhattan project used graphite to absorb neutrons and normal water for coolant.

Today heavy water is used in reactors that depend on unenriched uranium. Enriched uranium has a higher concentration of 238U. They tend to produce more plutonium and tritium as byproducts than other reactors. Since plutonium is key to most contemporary nuclear weapons, these kinds of plants are often used to produce weapons material.

In 1934 a Norwegian plant began producing fertilizer and heavy water as a byproduct. The plant used electrolysis to create ammonia. Electrolysis can also be used to separate heavy water from from typical water. German nuclear scientists had been unsuccessful at using graphite in their plants (they had unknowingly used impure graphite), and so were in search of heavy water. Before the war started French intelligence was trying to remove the heavy water in Norway from German access. After Germany took over both France and Norway the allies attempted to destroy the plant in late 1942. Air attacks on the plant convinced the Germans to move the operation to the homeland. That’s when the resistance made its strike.

A Valentine from a Girl in the Service Spotlight: B-25 Mitchell and M3A1 Stuart Tank