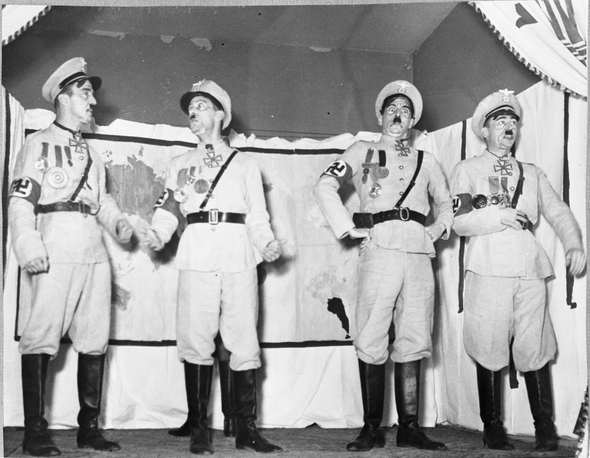 In 1945, Mardi Gras was on Tuesday, February 13th. It was the last Mardi Gras during which official, wide-scale celebrations were cancelled due to WWII.

Smaller celebrations happened both in New Orleans, and by celebrants scattered across the globe. One such celebration was documented by members of the US Army 24th General Hospital stationed in Italy.  Almost all members of this hospital, including were graduates of or medical staff at Tulane University in New Orleans, Louisiana. The 24th General Hospital embarked in August 1943 for posts overseas, operating first out of North Africa and then, in Florence, Italy, where they celebrated Mardi Gras 1945.

In addition to masquerading, the hospital staff performed a “parody in pantomime” (think Chaplin’s The Great Dictator) celebrating the Third Anniversary Mardi Gras Carnival of the Mystic Krewe of Snafu. The play was co-written by Captain Weiss and the cast were various members of the 24th General Hospital. Characters included Mussolini (“Benito the man who is Finito”), multiple Hitlers, Hirohito (“the Imperial Mosquito”), the Roosevelts, Chiang Kai-shek and wife, Churchill, Stalin and the Court of Snafu. The skit is introduced as:

Images from the Thomas Weiss collection can be seen online here in our Digital Collections. For more on Wartime Carnival see our flickr set and a previous blog post. “Long Live SNAFU, the King of Merriment!”