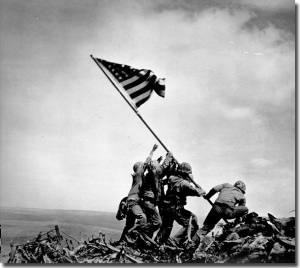 Flag-raising on Mount Suribachi, Iwo Jima on February 23, 1945. Courtesy of The National Archives and Records Administration.

The National WWII Museum’s Annual Student Essay contest will officially begin on January 5, 2015! This year’s middle and high school essay contest prompt, “How do you define a hero?” was inspired by the upcoming 70th anniversary of the iconic flag raising on Mount Suribachi at Iwo Jima. The six men who helped to raise the flag in the midst of battle on February 23, 1945, are often referred to as heroes. Three of them, John Bradley, Ira Hayes (Pima) and Rene Gagnon, survived the war while the remaining three, Sgt. Michael Strank, Pfc. Frank Sousley, and Corporal Harlon Henry Block, were either killed on Iwo Jima or died before the war had ended. One of the survivors, Ira Hayes, was repeatedly asked by admirers if he considered himself to be a hero as a result of his wartime actions. Hayes replied:

“How could I feel like a hero when only five men in my platoon of 45 survived, when only 27 men in my company of 250 managed to escape death or injury?”

For this year’s essay contest, participating students are asked to think and write about what being a hero means to them. While not a research paper per se, students must use WWII as a starting point for their responses and provide specific examples from their own experiences that support their ideas and connect with the prompt, “How do you define a hero?” Essays will be evaluated based on the student’s use of historic and contemporary evidence to support their argument, historical accuracy, and the essay’s originality, as well as clarity of expression, adherence to the contest theme, grammar, and punctuation.

The 2015 Museum Student Essay Contest is open to all middle school students (Grades 5-8) and all high school students (Grades 9-12) in the United States, United States territories, and military bases, and closes on March 31, 2015. Middle school students in grades 5-8 must write and submit an essay that is 500 words or less and entries will be eligible to win up to $250 and other prizes.  Participating high school students in grades 9-12 are required to submit an essay that is 1,000 words or less, with a chance to receive up to $1,000 for a first place essay. Both winning essays and honorable mentions will be posted on The National WWII Museum website.

All essays must be submitted through The National WWII Museum’s Essay Contest website by March 31, 2015, 5:00 p.m. CST. Only essays received before the deadline and in Microsoft Word or Pdf. format will be considered for awards. For more information about the 2015 Essay Contest, please visit the Museum’s contest site at www.nationalww2museum.org/essaycontests. We look forward to reading all of this year’s fabulous essays!

To learn more about what the fighting conditions were like at Iwo Jima and why the flag-raising was such an important symbol during the battle, explore the oral histories of two Marines who fought on the island, David Severance and Medal of Honor recipient Herschel “Woody” Williams. Check out the Museum’s Iwo Jima fact sheet and Focus On feature, as well as historic photographs and other interviews on The Digital Collections of The National WWII Museum website, too.

Stay in touch! Sign up for our free monthly teacher e-newsletter, Calling All Teachers, and keep up with our other educational opportunities and latest resources! 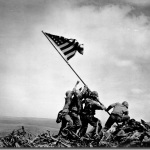 Flag-raising on Mount Suribachi, Iwo Jima on February 23, 1945. Courtesy of The National Archives and Records Administration. 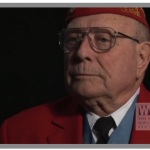 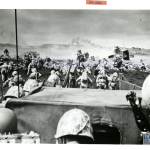 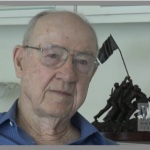 David Severance fought on Iwo Jima with the 28th Marines, which raised both flags during the battle on February 23, 1945. 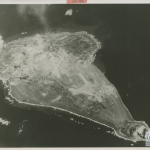 Aerial reconnaissance photograph of Iwo Jima prior to invasion, February 1945. U.S. Navy, Gift of Charles Ives, from the collection of The National WWII Museum. 2011.102.536. 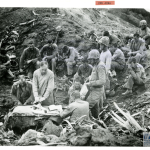 Mass is held on Mount Siribachi with the 5th Division Marines attending services, February 1945. U.S. Navy, Gift of Charles Ives, from the collection of The National WWII Museum. 2011.102.562. 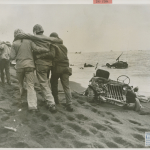 Wounded Marines on Iwo Jima are being taken to an aid station. U.S. Navy, Gift of Charles Ives, from the collection of The National WWII Museum. 2011.102.538. 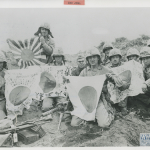 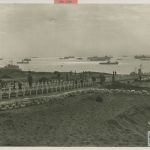 Uncompleted cemetery on Iwo Jima for the 3rd and 4th Divisions of Marines. U.S. Navy, Gift of Charles Ives, from the collection of The National WWII Museum. 011.102.539. 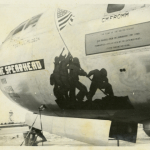 Joe Rosenthal's photograph of the flag-raising on Iwo Jima became famous quickly, as shown by the nose art on this B-29 Superfortress on the island of Tinian in 1945. Gift of David Lawrence, from the collection of The National WWII Museum. 2012.195.156.