Almost all the research that lead to the idea that an atomic weapon could be built occurred in Germany in the 1930s. As of 1939, of all the major labs doing atomic research, only Chadwick’s (in Liverpool) was not in Germany, or territory soon to be occupied by Germany. The experiments that uncovered the phenomenon of nuclear fission were conducted in Berlin just before the beginning of the war. In addition, Germany controlled great resources of uranium and heavy water, which were necessary for developing the bomb.

Yet Nazi science made very little progress towards a nuclear weapon during the war.

One popular, but unlikely, explanation is that Heisenberg sabotaged the effort. The true reason is probably more complicated.

Heisenberg did report to organizers of the effort that creating a sustained chain reaction was probably years away, and very challenging. This was in 1938 and 1939, after the discovery of fission, and following his visit Bohr in occupied Copenhagen. But this may have been more because of his lack of interest in engineering, and an orientation towards theoretical questions that led to shortsightedness. After all, the Manhattan project succeeded, with arguably lesser scientists.

Comparing the Manhattan Project to the Nazi effort is probably a fruitful way to look for answers.

The Manhattan project succeeded because theoretical scientists envisioned the possibility, engaged powerful politicians in the idea, and those politicians then engaged people with great organizational and leadership skills in assembling the scientists and resources necessary to meetthe challenge.

Vannevar Bush, U.S. Office of Scientific Research and Development wanted one person with power and skill, to lead the effort to develop an atomic weapon. Leslie Groves was recommended to him as that man. With the help of Robert Oppenheimer, who was also a systems thinker, Groves orchestrated an all-out effort to assemble a diverse team and get them everything they needed. Oppenheimer found theoreticians and empiricists and engineers with the knowledge, ability, and willingness to do the work. He also developed plans that laid out multiple methods to achieve each step necessary for success. For example, the Manhattan Project pursued multiple bomb and fuel designs right to the end of weapon development. Fat Man (dropped on Nagasaki) and Gadget (tested at Trinity) were implosion-type bombs with a plutonium core. Little Boy (dropped on Hiroshima) used a uranium core and a gun-type detonator. It is also critical to note that from 1939 when Roosevelt set up the Uranium Committee until 1942 when the Manhattan Project was formed, most of the work done was politicking and feasibility studies. And, finally, many of the scientists and engineers working on the project were immigrants from countries occupied by Germany, and who had fled fascism and war.

The Nazi effort to build a bomb was not so well designed. The first organization to develop atomic weapons, or Uranprojekt, was directed by physical chemist at the University of Hamburg, Paul Harteck. This first group was disbanded when the invasion of Poland led to the call of the scientists involved into military training.  The military then started its own project, and included in it Walther Bothe, Hans Geiger, Otto Hahn, and Heisenberg. The Kaiser Wilhelm Institute was made part of the project under military control. They made separate divisions of the project, and divided the work across several institutes, each with their own research agenda.

In 1942, about when the U.S. was forming the Manhattan Project, Germany removed their effort from military control, reassigned scientists to what was considered more pressing work, and refocused the nuclear project on energy development instead of weapons development. Hermann Goring, who had developed the aviation engineering effort so successfully, was put in charge, hoping that he could be successful in this project as well.

In June of 1942, a lab in Leipzig working on chain reactions exploded, possibly because of a hydrogen leak, destroying the facility most advanced in developing a critical reactor under German control. Six months later Fermi’s experimental pile in Chicago went critical, and the path to critical mass and sustained reactions became clearer for the Manhattan Project.

In the end, Goring’s leadership did not improve the Uranprojekt’s success. The effort was too fractured, and the almost endless supply of young scientists available to the Allied effort was not allowed to the Nazi effort, as many young technicians and scientists were conscripted as troops.

It required some hubris to succeed at building the bomb. Oppenheimer and Groves viewed each challenge in the long and complex path to success as points to plan for, and achievements to develop towards, and not as obstacles. It was the all-out philosophy, and the ability to see both the forest and the trees that led to the success of the Manhattan Project. 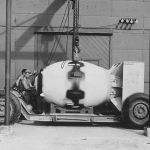 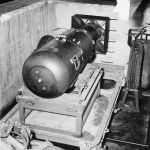 Little Boy, on the dock, waiting to be loaded onto its bomber. 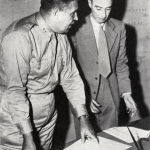 Leslie Groves and Robert Oppenheimer were an odd match, but excellent partners.

If you are a middle school science teacher, and want to improve your teaching, consider joining us for Real World Science – Yesterday, Today, and Tomorrow, a week-long teacher seminar this July. Sign up for email updates here.

all photos from the Wikimedia Commons.

Donor Spotlight: Manufacturing Victory: The Arsenal of Democracy Home Front Friday: The Spirit of the Season