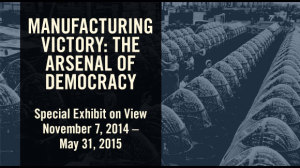 During World War II, a sense of civic duty and responsibility united the nation and fueled America’s war effort like nothing before or since. People stepped forward to fulfill the jobs demanded of them, and they excelled beyond all expectations. Civilians on the Home Front who worked to assemble America’s “Arsenal of Democracy” were essential to securing an Allied victory, and their stories serve as a reminder of what patriotism truly means.

The Museum’s current special exhibit, Manufacturing Victory: The Arsenal of Democracy, now showing in the Joe W. and Dorothy Dorsett Brown Foundation Special Exhibit Gallery, tells this lesser-known story of American unity on the Home Front and how it culminated in the creation of America’s mighty industrial war engine. The exhibit examines several key industries whose operations and facilities completely rearranged to make way for wartime production. We are proud to have two of the key industrial leaders featured in the exhibit as supporters of the Museum as well. 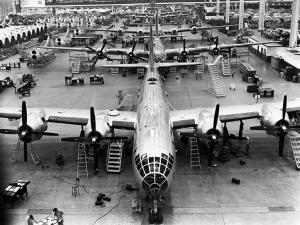 During World War II, The Boeing Company manufactured two of the most iconic bomber aircraft. Over 12,000 B-17 Flying Fortress bombers were produced, becoming instrumental in the bombing of German-controlled Europe. Boeing’s second contribution to the war, the B-29 Super Fortress bomber, was used to lay waste to Japan’s urban centers, aiding the Allied victory in the Pacific. Now 70 years later, Boeing shows its support of the Museum’s mission of preserving the story of the war the naming sponsor of our US Freedom Pavilion: The Boeing Center, which paints the picture of a nation mobilized for war . 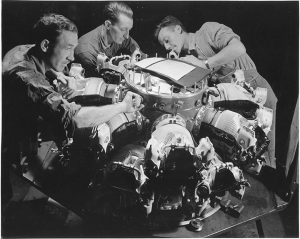 During the war, the need for aircraft production was at an all-time high, though incredibly complicated due to the large number of parts and pieces involved. Pratt & Whitney built engines for aircraft that could be shipped for assembly in other plants. Their R-1830 Twin Wasp engine powered a variety of American planes, and over 170,000 of the engines were produced during the war. Without the increase in engine production, the Allies would not have been able to take control of the skies. Pratt & Whitney has helped the Museum immortalize the war’s airpower through the generous sponsorship of the Vought F4U Corsair warbird that hangs in The Boeing Center.

The National WWII Museum is very thankful for the support of Pratt & Whitney and The Boeing Company for their generous contributions to the expansion of the Museum’s campus and their strong efforts on the home front during a time of necessary American production. It is with their efforts that helped our nation at war and that the story of the war is preserved for future generations.