Seventy years ago today—on 7 November 1944—47,977,063 Americans voted in the Presidential Election. For those serving away from home, it was possible to vote in elections.  The first step was for the service person to apply for a state ballot before September 1, 1944. If the state ballot had not arrived by October 1, which was the case more often than not, the service member received a shortened Federal ballot (containing only President, Vice President and Congressmen), given that the state in which the service member qualified to vote in had passed legislation to authorize use of the shortened Federal ballot. Not surprisingly, given all of these restrictions, in the end, only 85,000 Federal ballots were sent to those serving overseas. Thomas Dewey, the challenger, had hoped to become the first president born in the Twentieth Century, but President Franklin Roosevelt won by 3,285,567 votes and remained in office for a fourth term.

We have several pieces related to the 1944 election. One of the most unique is a newspaper, hand-drawn and hand-lettered by American POWs in Stalag Luft IV in Gross Tychow, Pomerania, which tells of the results of the election in the POW camp. The headline reads “Straw Vote gives FDR the Lager.” 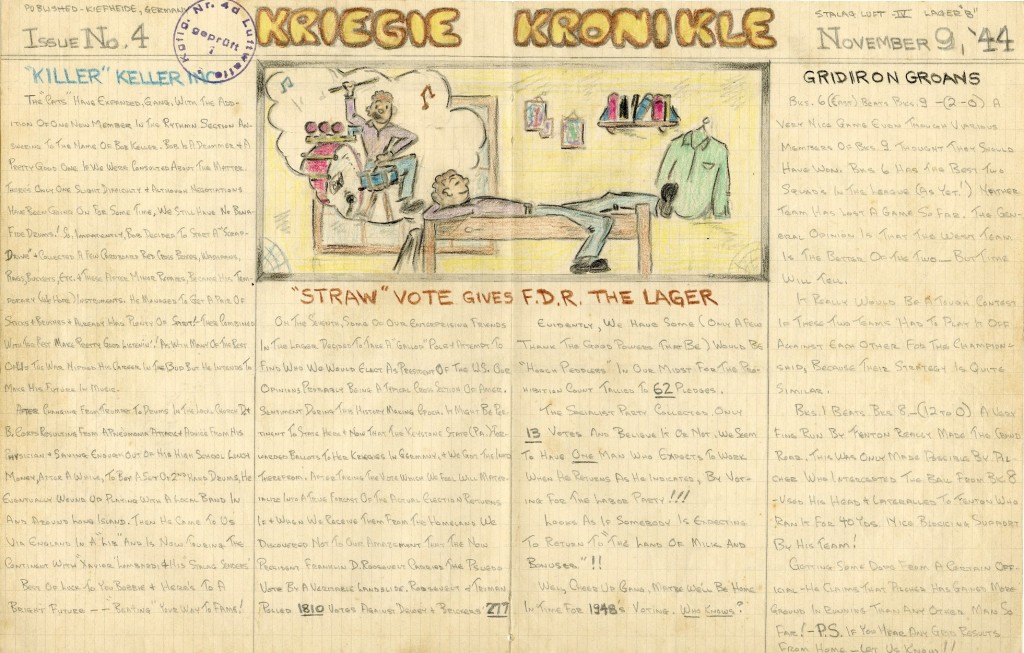 The article (in the center column of the spread) reads:

On the seventh, some of our enterprising friends in the Lager decided  to tale a “Gallop” pole & attempt to find who we would  elect as President of the U.S. Our opinions probably being a typical cross section of Amer. sentiment during this history making epoch. It might be pertinent to some here & now that they Keystone State (PA.) forwarded ballots to her Kreigies in Germany, & we got the info therefrom. After taking the vote which we feel will materialize into a true forecast of the actual election returns if & when we receive them from the homeland We discovered not to our amazement that the now President Franklin D. Roosevelt carried the pseudo vote by a veritable landslide. Roosevelt & Truman polled 1810 votes against Dewey & Brickers’ 277. Evidently, we had some (only a few thank the good powers that be) would be “hooch peddlers” in our midst for the Prohibition count tallied to 62 pledges.

The Socialist Party collected only 13 votes and believe it or not, we seem to have one man who expects to work when her returns as he indicated by voting for the Labor Party!!!

Looks as if somebody is expecting to return to the “Land of milk and bonuses”!!

Many of those serving during WWII, did vote for the first time in 1948, as many who were fighting were not old enough to vote. The voting age was finally lowered to eighteen in 1972, hastened by the “old enough to fight, old enough to vote” cries during the Vietnam War. Legislation is still being enacted and expanded to protect the rights of overseas citizens, uniformed service members, and their eligible family members to vote in Federal elections. In 2009, the United States Congress expanded the 1986 Uniformed and Overseas Citizens Voting Act (UOCAVA) by enacting the Military and Overseas Voter Empowerment (MOVE) Act to provide greater protection for these rights.

See here for a previous post on the War Ballot of 1944. The ballot was received on December 5, 1944, nearly a full month after the election!