SciTech Tuesday: So a General, a Major, and a Communist from Berkeley walk out in the desert…

In November 1942, a General, a Major, and a Communist from Berkeley walked into the desert…And they came out with a plan to make a facility that would build the first nuclear bombs.

It was fall of 1942, and the Manhattan Project had already become the biggest science and engineering project in US History. It would eventually cost $2 billion in contemporary dollars (about 26 billion today) and employ about 130,000 people. But it had not grown to its full extent yet, and it needed sites and facilities. Research at UC Berkeley and the University of Chicago would continue, but other projects were too dangerous or too secret to take place in cities on university campuses.

General Leslie Groves had spent his last several years overseeing the construction of the Pentagon. Although he did an excellent job, he found it exhausting, and was hoping for what he considered the relative peace of war duty as a next assignment. Instead he was given the reins of the Manhattan Project.

Groves knew his first step should be to find a director of the scientific project—someone to lead and oversee all the scientific and technological aspects of the work. His choice was Robert Oppenheimer, a theoretical physicist whose friends and relatives (and wife!) were all members of the Communist Party. Groves found strong resistance from military security, and further concerns that all these Nobel scientists would be led by someone without such distinction. Groves argued that Oppenheimer was a genius who could understand all aspects of the project, that all the other possibilities were occupied on their own projects, and that the Manhattan Project had a bad reputation, limiting the pool of interested parties.

Groves is now considered a genius for choosing Oppenheimer, but at the time the opinion weighed more on the side of crazy. Groves and Oppenheimer met with Vannevar Bush in Washington DC, and the appointment was made.

In October, work had begun to build a huge facility at Oak Ridge, Tennessee to enrich Uranium using a gaseous separation process. Land had been purchased in June to build a facility in Illinois to produce Plutonium. Delays in construction of the Illinois facility led to Fermi’s work under the University of Chicago football field. The success of that experiment convinced authorities to build a lab that later relocated a short distance to become Argonne National Laboratories. Another production facility for plutonium would be built in central Washington on the banks of the Columbia River in January of 1943. It later became Hanford Nuclear Reservation. Other sites, smaller and spread throughout the country and Canada, were developed as well.

There remained the need for a facility where the actual construction of the working bombs would take place. Oppenheimer had a country home in Albuquerque, New Mexico, and loved the high and dry desert of northern New Mexico. Nothing could be more remote, and thus secure, and he believed the beauty of the landscape would inspire the scientists brought there. He suggested the region as a possible site to General Groves. The two men visited it with Major John Dudley, a surveyor. The purchase of the site was approved before the end of November 1942, and after spending $7 million the site of almost 50,000 acres was completed in November of 1943.

This would become the site where Otto Frisch almost caused a meltdown with stacks of Uranium bricks. It was where the three bombs, one tested at Trinity, and two deployed over Japan, were designed and built. It was where Richard Feynman went out dancing and drumming at night, causing rumors that an Indian spirit haunted the hills. Argonne, Hanford, Los Alamos, and Oak Ridge remain as important government research and military facilities, but Los Alamos remains the most isolated of them.

Check out our new special exhibit, Manufacturing Victory, where you can see that Manhattan Project Patch and many other cool artifacts from the Home Front, where folks made all the stuff we used to win the war. 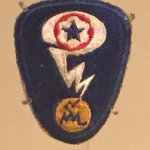 The official patch for uniforms of the Manhattan Project (photo by the author from the special exhibit, Manufacturing Victory) 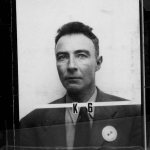 Oppenheimer's security badge for the Manhattan Project (from the National Archives) 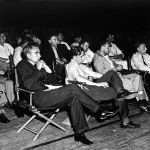 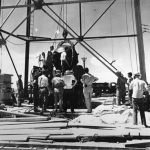 Readying the bomb for testing at Trinity (from Wikimedia Commons) 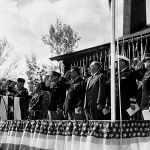 An awards ceremony at Los Alamos

#myww2stuff- Submit your preservation conundrums! How to Give a Gift that Gives More This Holiday Season