Nobody ever saw that headline, but in a way it was true. 71 years ago Nazi troops landed in North America. 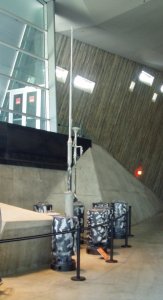 Weather Station Kurt, on display at the National War Museum of Canada, in Ottawa (from Wikipedia)

Northern Hemisphere weather generally moves from west to east. This gave the Allies an advantage in the war. In the absence of the satellites and ground radar we have now, observations stations and data collection in the provided the basis of weather prediction. Just as the Midwest and East Coast had more reliable weather predictions than the West Coast, the Allies had better predictions of conditions in the North Atlantic and the European Continent than the Germans had.

The Germans tried to solve this problem by establishing weather stations across the North Atlantic. They had stations in Greenland and on other islands, and sent specially equipped planes out to collect data too.

In mid-September of 1943 a U-Boat set out on its first voyage from a port on the coast of France. U-537 carried one of 26 automated weather stations made by Siemens. The weather station had two masts and 10 sealed cylinders. One mast held the one cylinder with instruments in it, and was 10 meters high. It was also the transmission antenna. The other mast had an anemometer and wind vane, The remaining 9 cylinders, and most of the mass of the station, was filled with nickel-cadmium batteries that powered the 150 Watt radio transmitter. The transmitter sent out a two minute signal every three hours. The station was code-named Kurt.

U-537 suffered significant storm damage that left unable to dive and unable to fire ammunition. In spite of this the captain successfully got  his ship to Newfoundland, which was then an independent country. They landed in Martin Bay, Labrador and set up the station. Part of the crew remained on board to work on repairs. After installing the station, the crew camouflaged it by strewing packs of American cigarettes about the site. Having repaired their vessel, they returned to France, expecting 6 months of use from the station before its batteries expired. 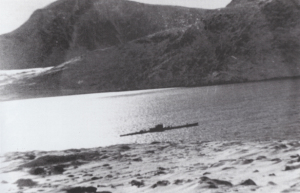 U-537 in St Martin’s Bay, Labrador (from the collection of the National World War II Museum).

U-867 had left port a month earlier, with a matching station also meant for deployment in North America. This ship, however, was sunk by bombs dropped by a British-manned B-24 off the coast of Norway.

Kurt was rediscovered by a Canadian geologist in 1977 while doing field studies. On its rediscovery its nature and significance was not really understood. At about the same time a retired Siemens engineer, in the process of writing a history of the company, found the log books of the meteorologist who was on the expedition to install Kurt. An expedition sent by the Canadian Department of National Defence found the station damaged but still standing in 1981. Kurt has been preserved in the Canadian War Museum in Ottawa.