COUNTDOWN TO ROAD TO BERLIN: INTO THE GERMAN HOMELAND 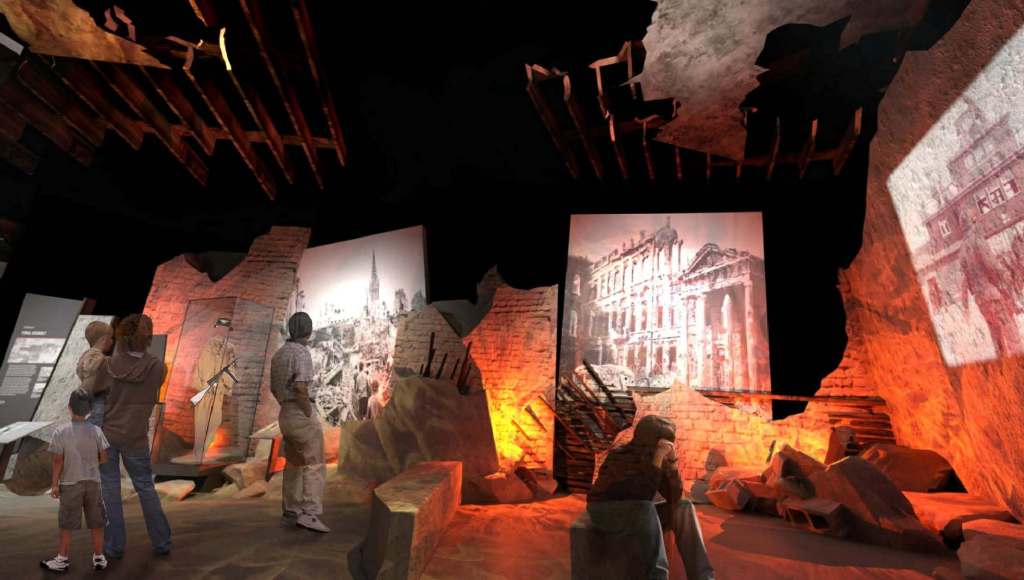 As we continue our journey through the Road to Berlin, we make our way into the final gallery, Into the German Homeland.

This gallery will tell the story of the major events following the Battle of the Bulge as the Allies pushed into Germany.  The Allies captured the last remaining bridge over the Rhine River at Remagen in March 1945 and invaded the German heartland.   Political controversy erupted as the three Allied powers closed in on the German Capital of Berlin, with the Soviet Army occupying the city in horrible street to street fighting.

As the city was razed around him, Hitler committed suicide and Germany finally surrendered on May 8, 1945 amidst total ruin.  V-E Day finally arrived and Americans celebrated – even as they braced for continued bloodshed in the Pacific. Into the German Homeland and each of its components – Breaking the Siegfried Line, Desperate Resistance, and Final Assault – will reveal the devastation of German cities through exhibits built to mimic blown-out buildings, with projections of fires and photographs scattered throughout the space.

Joe W. Brown and Dorothy Dorsett Brown moved to New Orleans in the mid-1920s, and their successes in real estate and the oil industry allowed them to pursue philanthropic endeavors. Mrs. Brown led the Foundation until she passed away in 1989, and the Foundation is now led by the Board President, D. Paul Spencer, along with the Board of Trustees. A friend of Spencer’s from their service in the Army introduced him to the Browns after he completed college, and Spencer remained their dear friend and employee for decades afterwards, up until their deaths.

Spencer is a WWII veteran of the European Theater, where he served as a platoon commander in the 90th Infantry Division of the US Army. His platoon was part of a battle in Hof during the latter part of the war, where he recalls “all kinds of hell broke loose.” He remembers a German truck crashing into the side of the road and roughly a dozen German soldiers came toward him. Spencer realized after the crash that his carbine was jammed, and the German soldiers begged him not to shoot. “Thank goodness they were not firing at me. My guys were just behind me a little bit and I was all alone. I put my hand over the cover that was exposed so they wouldn’t see that I couldn’t fire at them.” 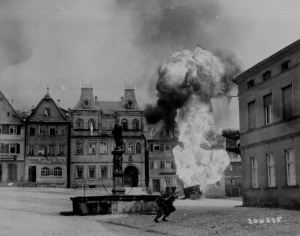 Paul Spencer and the men of the 90th Infantry Division engaged in several battles as they made their way through Germany near the end of the war. Spencer and his fellow soldiers liberated the Merkers Salt Mine, where Nazis were hiding gold hoard, silver, and stolen art.

The Joe W. and Dorothy Dorsett Brown Foundation’s loyal support of The National WWII Museum predates the Museum’s opening in 2000. The Foundation has provided significant funding for the Museum’s capital expansion since its earliest phases. The expansion has provided exhibit spaces that have been crucial in the fulfillment of our mission. In addition to generously naming the Into the German Homeland gallery, the Foundation has also sponsored The Joe W. and Dorothy Dorsett Brown Foundation Special Exhibits Gallery, the Saluting the Services: Service Branch Cases within the US Freedom Pavilion: The Boeing Center, and a gallery in the future Liberation Pavilion.

We are privileged to be able to honor D. Paul Spencer’s service in Into the German Homeland. The Museum and the diverse audiences it serves benefit in many ways from The Joe W. and Dorothy Dorsett Brown Foundation’s remarkable support.