COUNTDOWN TO ROAD TO BERLIN: SIEGE OF BASTOGNE

As we move forward on our journey through the Road to Berlin, we stop next at the Siege of Bastogne exhibit within the Battle of the Bulge Gallery, which will focus on the significance of Bastogne as a vital crossroads town that would be crucial for either the Allies or Axis to advance, as it was a hub for several major roads in southeast Belgium. 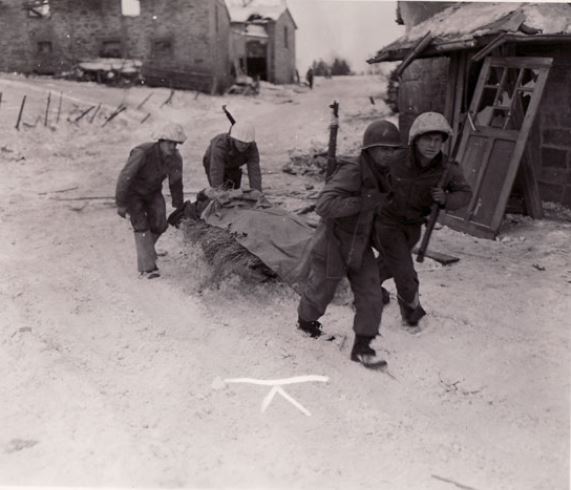 With their eyes on Antwerp, the Germans were determined to gain control of Bastogne.  They encircled the town and its resident Allied forces.  The beleaguered American troops, including the 101st Airborne, were running critically low on food and supplies and were vastly unprepared for the harsh European winter.

Siege of Bastogne will feature defense tactics used by the Americans to fend off the Germans, and features the story of Medal of Honor recipient Staff Sergeant Archer Gammon, who died in the line of duty while singlehandedly defending against impending German attacks. Despite the adverse conditions, the Americans sustained their resistance until reinforcements arrived. Commander McAuliffe’s refusal to surrender to at Bastogne remains a symbol of American resolve and the determination that was necessary to break the German stronghold.

The Siege of Bastogne exhibit in the new Road to Berlin galleries has been made possible through a generous gift from Mr. and Mrs. Kenneth L. Blanchard Sr., in honor of Don Blanchard.

Kenneth Blanchard has been a supporter of The National WWII Museum since 2000. He first became involved through his company, Superior Energy Services, where he worked for 26 years before retiring in 2010. Superior is a major supporter of the Museum’s Road to Victory Capital Campaign, sponsoring the Voices of Courage oral history exhibit in the US Freedom Pavilion: The Boeing Center.

Recognizing the importance of the partnership of Superior Energy Services and The National WWII Museum, Blanchard became inspired to contribute personally. He states that the Museum “provides an informative and inspiring experience for future generations,” and that without outside support “the stories of these brave men and women would be lost.” 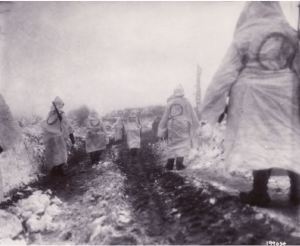 Men of the 2nd Infantry Division march through the snow. (Courtesy National Archives)

Ken and Jane Blanchard have attended several Museum events. They usually have been accompanied by Ken’s father, Don Blanchard, who served in the 2nd Armored Division, known as “Hell on Wheels.” Blanchard states that when his father visits the Museum, he is often moved to tears by the “recognition of the sacrifices and service” given by so many from his generation. It was his father’s courage and bravery that inspired Ken Blanchard to name the Siege of Bastogne exhibit in the Battle of the Bulge gallery, an important feature in the new pavilion, Campaigns of Courage: European and Pacific Theaters. Don Blanchard fought in the historic battle and was in the siege in the winter of 1944.

When Blanchard was growing up, his father never discussed the war. It wasn’t until his father visited the Museum for the first time that he began to open up about his involvement. Ken pitched the idea of recording his oral history for the Museum archives, and recalls, “It was not an easy sell.” Don was eventually persuaded, and ever since, he has been more comfortable sharing his stories, including comments for a feature article for a Lafayette newspaper.

Ken Blanchard asserts that the Museum is the “one of the best things to ever happen to the city of New Orleans, the state of Louisiana, and this area of the country” and that the Museum is “capturing and presenting in a very unique and very professional way” one of the most important events in modern world history. He is particularly moved by veteran volunteers at the institution. Their dedication to the Museum and desire to help visitors is inspiring. The volunteers also have made it easier for his father to feel comfortable discussing his role in the war effort.

Blanchard states that it is important to invest in the expansion of The National WWII Museum, whether that investment comes in the form of time or gifts. He said the Museum is particularly effective at telling the war story in an interactive way, immersing visitors in a decisive time in history.

The Museum is fortunate to have the encouragement of Ken and Jane Blanchard. We are grateful for their support of our programs and capital expansion