COUNTDOWN TO ROAD TO BERLIN: BREAKING THE SIEGFRIED LINE 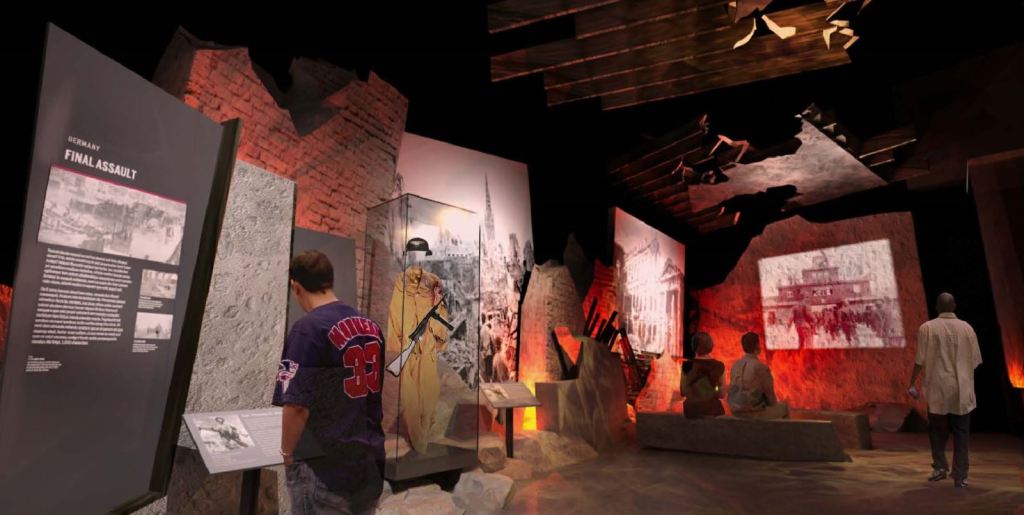 As we continue our adventure through the Road to Berlin, we stop next at the riveting Breaking the Siegfried Line exhibit, which tells the gripping history of the offensive strategy conducted by the Allies in February 1945 and the counteroffensive at Alsace in attempts to break through Germany’s line of defense.

The Siegfried Line fortified Germany’s western border with France. It consisted of interlocking bunkers systems and hedge-hog teeth tank defenses that stretched for over 300 miles. In August of 1944 Hitler reinforced the Siegfried Line to halt the American forces advancing upon Germany from the Normandy landings. The defensive line proved to be a formidable obstacle, but the Allied forces attacking along the line in the Hurtgen Forest campaign and Battle of the Bulge ultimately broke through Siegfried defenses at great cost in lives. Breaching the line left the Allies positioned for the final drive deep into the German homeland.

The Breaking the Siegfried Line exhibit inside the Into the German Homeland gallery has been made possible through a generous gift from Lt. Col. Robert Kelso and his wife, Betty. Lieutenant Colonel Kelso is a veteran of two wars and currently lives in San Antonio. 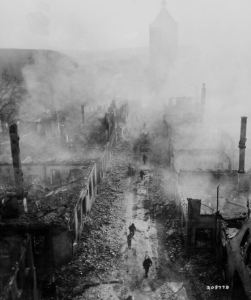 Infantrymen of the 255th Infantry Regiment move down a street in Waldenburg to hunt out the Hun after a recent raid by 63rd Division. Image courtesy of National Archives.

Kelso served in the Army during World War II and is believed to be the youngest known soldier injured during the conflict. With his recruiter unaware of his real age, Kelso entered service at age 13 and was wounded by a German bayonet at 14. He received the Purple Heart as a result of the war injury.

During World War II, Kelso was assigned to the 342nd Armored Field Artillery Battalion and fought throughout Europe as a private. After World War II, Kelso served in the US Army Reserve, but in 1963, after the onset of the Vietnam War, he returned to active duty at the rank of captain. He completed two tours in Vietnam, first as an advisor with the 22nd ARVN Division, then with the famed 25th Infantry Division “Tropic Lightning.” His awards include the Combat Infantryman’s Badge, Legion of Merit, Bronze Star with two oak leaf clusters, Meritorious Service Medal with oak leaf cluster, Joint Service Commendation Medal, and French Legion of Honor.

Robert and Betty Kelso first became involved with the Museum when a civic leader of San Antonio sponsored a traveling event to San Antonio for veterans and supporters. After his initial visit to the Museum, Kelso felt compelled to make a gift. He felt that naming the Breaking the Siegfried Line was the most appropriate fit. Kelso states that he vividly remembers “crossing the line in Germany” and it is something he will never forget.

The Kelsos are proud supporters of other institutions that serve the military community. They have supported the National Army Museum since 2008, and graciously offered their home and ranch to 21 service members recuperating at Brooke Army Medical Center, so that they could take a day trip and escape the rigors of hospital rehabilitation life.

The Museum is grateful for the generosity of Lieutenant Colonel Robert Kelso and his wife, Betty, as they help to advance the capital expansion.