The Ofuna Roster: “Every man who was there has a unique story to tell”

Today is National POW/MIA Recognition Day. In recognition of those who suffered as POWs in WWII, we would like to highlight a special recent addition to the Museum’s collection and the wonderful connections that the donation of this material set into motion.

We are contacted daily by families of those who served in WWII with questions about artifacts in their possession. In May 2014, Phyllis Parr reached out to the Museum about an artifact from her father’s service.

Phyllis’ father, Phil “Bo” Perabo was from Tupelo, Mississippi and served as a pilot in both the Battle of the Atlantic and in the Pacific. Perabo flew off of the Bogue, the Card and the Bennington. Perabo was captured after bailing out on a mission to Japan, after swimming eight hours to reach the shore. He was taken to Ofuna POW camp where he was reunited with his childhood friend Dave “Son” Puckett, also an aviator who had been captured months earlier.

While at Ofuna—which has received recent news attention because it also became home to Olympic runner Louis Zamperini whose story is told in the bestselling book Unbroken, soon to be a major motion picture—just after liberation, Perabo compiled a roster of all of those confined there, having each man sign in his own hand, his name, unit, and hometown. The roster lists 135 men, predominantly Naval aviators.

Phyllis said about the roster, “My family and I have always believed that the roster does not belong to us alone but to all the families of the men who were at Ofuna.” This led to some citizen archivist work. Phyllis sent out over twenty letters to any former prisoners or their descendants that she could track down. In her letter she told about her dad, about the Ofuna roster and her plans to donate the item to The National WWII Museum. Several people responded to the letter— some with their own stories of their father’s experiences.

On August 8th, having learned of the roster and its placement at the Museum, we received a visit from three grandsons of the late Ofuna POW Forrest E. McCormick. Forrest E. McCormick was a flier in the VF-17 Squadron based on the USS Hornet. It was a miracle, McCormick survived to make it to the Ofuna camp. He had bailed out over a Japanese beach having been shot and having broken his arm at the elbow. A village doctor saved him from villagers bent on beating him to death. After the ordeal in Ofuna his grandson Evan McCormick wrote, “his left arm was 3 inches shorter than his right the rest of his life and instead of the 6, 3’’ height he went to war as, he stood around 6 ft the rest of his life… The happy ending to all this is that he made it back, had four kids, and lived a good life.” It was a profound experience, and seeing the roster was the highlight of the McCormick brothers’ trip.

Phil Perabo passed away on May 18, 2014, just three days after his daughter and I visited and spoke about his experiences. We are grateful to him and to his daughter for documenting his experience and for sharing that documentation with the Museum and others. 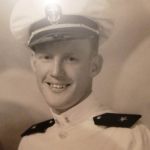 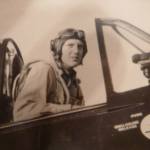 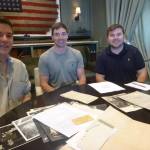 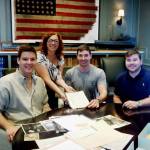 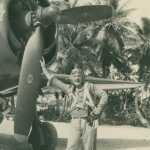 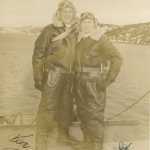 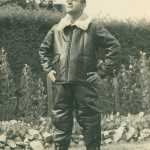 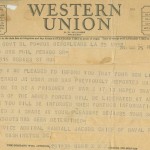 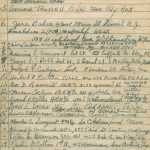 Images: Gift of the Perabo Family, 2014 and Courtesy of the McCormick Family

To learn more about our POW material, see Guests of the Third Reich: American POWs in Europe. If you have material or stories from a WWII POW that you’d like to share with the Museum, please contact us.

COUNTDOWN TO ROAD TO BERLIN: BATTLE OF THE BULGE “Your Job Now” – High School During WWII