SciTech Tuesday: What do gumbo, fighter planes and Hawaii have in common?

Plants are amazing! And it’s easy to forget how important they are to us. In World War II we depended on the flowers of one plant family, the Malvaceae for many important things. Confused? Well let’s clear it up.

A surprising thing to many people is how many of the boats and planes in World War II were made of wood and cloth. For example, the de Haviland Mosquito fighter, the fastest plane of its time, was made from balsa* plywood covered with cotton duck. The Vickers Wellington, a bomber, was made from a geodesic aluminum frame covered with cotton. Cotton comes from the flower of Gossypium, a shrub that uses the fluffy material to protect and disperse seeds. Gossypium is a member of the Malvaceae. Both of these planes are British, and were critical to winning the Battle of Britain. The Wellington was important in bombing submarines later in the war as well. There is a short video about the construction of the Mosquito here.

One of the most maligned members of the Malvaceae is Ablemoschus, or okra. Many people despise the gelatinous material inside the okra pod. The polymers that make the cotton fluff also make the gelatin. Gumbo is a spicy stew in the cuisine of Louisiana. The traditional gumbo uses okra to thicken it. There is a variant called filé gumbo made with powdered sassafras leaves as the thickener.

After the bombing of Pearl Harbor, Americans found themselves caring a lot about a place of which they knew little. One of the earliest symbols of Hawaii was the Hibiscus flower, of the family Malvaceae. It doesn’t have any gummy gooey stuff in that flower, but the flower pods are a common ingredient in herbal teas. Of course, cotton was also a common ingredient in military uniforms. Production of cotton had to be massively increased in the war years to meet the demand for cotton in all those uniforms, packs, and hats. The US Military used 36,000,000,000 yard of cotton textiles in the war. That’s a lot of flowers. 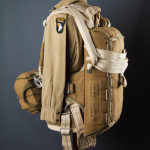 Parachute packs were made from cotton, while their straps were often made from hemp. 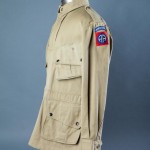 Uniforms were made from cotton, a common product that needed increased production in the war years. 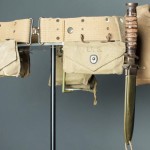 Belts and packs made of cotton were an important part of the soldier's kit.

*Balsa is a tropical tree of the western hemisphere, Ochroma, also a member of the Malvaceae.

Learn more about sciences during World War II in our upcoming lecture:

Ethnobotanist Dr. Mark Plotkin will be discussing the use of plant products like quinine and rubber, in WWII, at the Museum on Thursday, September 11th. For more information on this lecture, visit us here.

Check in next week to read about some plants that have been important for Home Front and war technologies, in honor of this event.

All images are from the collection of the National WWII Museum