One of the oldest domesticated plants is flax. It was probably domesticated in Mesopotamia, and was grown and used in Ancient Egypt. Today flax (Linum usitatissimum) is the rare plant that gets the hat-trick for utility—used in three very different ways to make important products. There are examples for two of those uses in World War. The third use is a relatively recent one.

One major theme in the story of World War II technology is the continued application of tools and processes that had already been used in the past. The war came on fast for the US, which had avoided it as long as possible, and for the UK, which didn’t foresee the rapid fall of France. Planes in World War I were wooden, covered with fabric. Some of the RAF’s earliest and most successful planes in World War II were also fabric covered. In the US cotton was relatively inexpensive, and available within its borders. In the UK there was no cotton production and transport overseas was problematic. Planes produced in Australia for the Pacific theater used cotton, but planes produced in England used linen covering. Linen is made from fibers in the flax plant.

Linen was produced in Northern Ireland and western Europe during in the early 1900’s. The German advance across the continent made most linen produced there unavailable. The Republic of Ireland began producing flax for production in the North. This linen was used to cover planes like the Hawker Hurricane and for the straps of parachutes and other parts of equipment. Linen stretches very little, even less than cotton, and is tough and weather resistant. 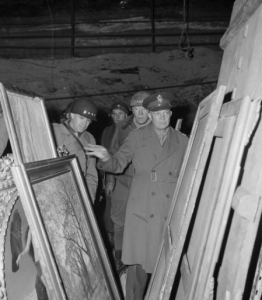 Eisenhower looking at rescued paintings–painted in linseed oil on flax canvases. From the National Archives.

Flax is also used for oil production. Oil paint was, and for art paints still is, based on linseed oil, which comes from flax seed. Those paintings of the masters, captured by the Germans and rescued by the Monuments Men, were made in linseed oil paints on linen canvases (cotton is common for canvases in the US, where linen is more expensive than in Europe).

Linseed oil, mixed with cork or wood fibers, was made into flooring (Linoleum) by British inventor Frederic Walton in 1855. Today what we call linoleum has no linseed oil in it, but is made of polyvinyl chloride from petroleum.

So flax is used for fiber in clothing and industry, and for oil in industry. The usitatissimum in its name means ‘most useful.’ What is the third use that gives it the hat trick?

Well you’ve guessed already. Flax oil is a hot nutritional and dietary product. The oil has omega 3 fatty acids, and lignan phytoestrogens believed to be healthful for heart and digestive diseases. The oil used for industry and nutrition are basically the same—cold pressed from the seed. Oil production for industry is often aided with chemical extraction using petrochemicals not safe for consumption.

Learn more about sciences during World War II in our upcoming lecture:

Ethnobotanist Dr. Mark Plotkin will be discussing the use of plant products like quinine and rubber, in WWII, at the Museum on Thursday, September 11th. For more information on this lecture, visit us here.

Check in next week to read about some plants that have been important for Home Front and war technologies, in honor of this event.