Two plants and their products make up our second-to-last dispatch on the use of plant materials in World War II.

Hemp is a plant which today has something of a tarnished reputation. Because varieties of Cannabis sative are used for production of tetrahydrocannabinol (THC) its cultivation has come under great scrutiny in this country over the last 50 or 60 years. Most varieties, including the tall ones grown for fiber, not only produce little THC, but other chemicals that would render the THC ineffective.

Hemp is one of the oldest cultivated plants, with evidence of its agricultural use going back to neolithic China (about 10,000 BCE). Its use spread across the old world, and while it may have gotten a boost from pseudo-pharmaceutical use, it was utilized as a fiber source for rough clothing and ropes, and the leaves often used in soups and stews. The seeds were used for oils. Colonists brought the plant to the new world, where it was used in much the same manner, and made up a large part of plantation production in the colonial states. Hemp’s use declined after the Civil War, and and world-wide dropped as other fibers, including synthetic materials, increased in the 20th century. In the early 1940s production of rope, cord, webbing and cloth increased, and the ability to trade overseas decreased. The US Department of Agriculture advocated for the cultivation of hemp to meet the increased demand for fiber. Many of the rougher parts of packs and bags were made with hemp in wartime, and much of the webbing and straps on packs and parachutes was also made with hemp.

Hemp is botanically in its own family, the Cannabaceae. The family is small, with hemp’s closest relative being Humulus lupulus, the hop, whose flower is used to flavor beer. The seeds of hemp have all essential amino acids, a rarity for plants, and so can be used as a protein supplement.

Another plant whose important product was in short supply in World War II is mahogany. Many of the boats used in the war, particularly those made by the Higgins company, like the landing craft and the PT boats, were made of wood. Metal was in short supply, and the tight window for ramping up production often demanded the use of already-present technologies and construction plans. The PT boats were 78 foot patrol vessels that helped the Navy recover from Pearl Harbor. Though they were small, they could be built quickly and used flexibly. The relatively small PT boats were used in coastal battles against German and Japanese ships. Higgins industries made about 200 PT boats, many of which went to Russian and British forces early in the war.

Higgins PT boats were made of mahogany. Mahogany comes from tropical trees in Central and South America. These are typically trees from Swietenia. The wood from these trees is the opposite of another tropical tree also used in the war effort—balsa. Mahogany is a dense hardwood with a fine and straight grain. Swietenia is threatened in its native range, and so logging it is now restricted. Most commercial mahogany today comes from plantations of Swietenia in Asia, or from related members of the family native to Asia. The mangrove is also in this family of trees.

The National WWII Museum has one of the original Higgins PT boats—PT 305. PT 305 served in the Mediterranean late in the war, and saw action against German forces there. After the war the boat was trimmed to be smaller and used to seed oyster beds. It was purchased in 2007 by the museum as a renovation project.

In the renovation of PT 305 we’ve learned much about the boat’s construction. Both the hull and the deck are made of two layers of mahogany planks set at cross-angles. In between the layers is a sheet of cotton ducking that is soaked in a polymer that never dries. The two layers of wood at angles strengthen the structure and allow it to withstand traveling at speed in rough seas. The cotton layer makes it waterproof. 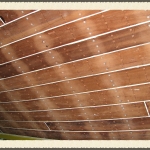 Polymer seals the space between the planks and over the spots where fasteners are used. 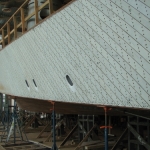 The hull and keel are both two-layered with planking and duck between. 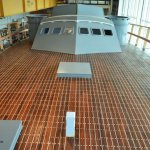 The mahogany deck has another layer of planking on the other side.

These two plants, mahogany and hemp, played an important role in winning the war. Their own history and botany bring an interesting twist to the roles they played in the technology of World War 2.

Next week’s post will be about rubber and the chemical revolution of polymers.

Digital Learning for All Ages COUNTDOWN TO ROAD TO BERLIN: BATTLE OF THE BULGE