In our last blog post of the Road to Berlin countdown, we covered the D-Day Theater and D-Day Beach exhibit. Now, we examine the story of the Allies experiences in France through Northern Europe: Breakout and Liberation, followed by a spotlight on our donors that have generously sponsored this important gallery. 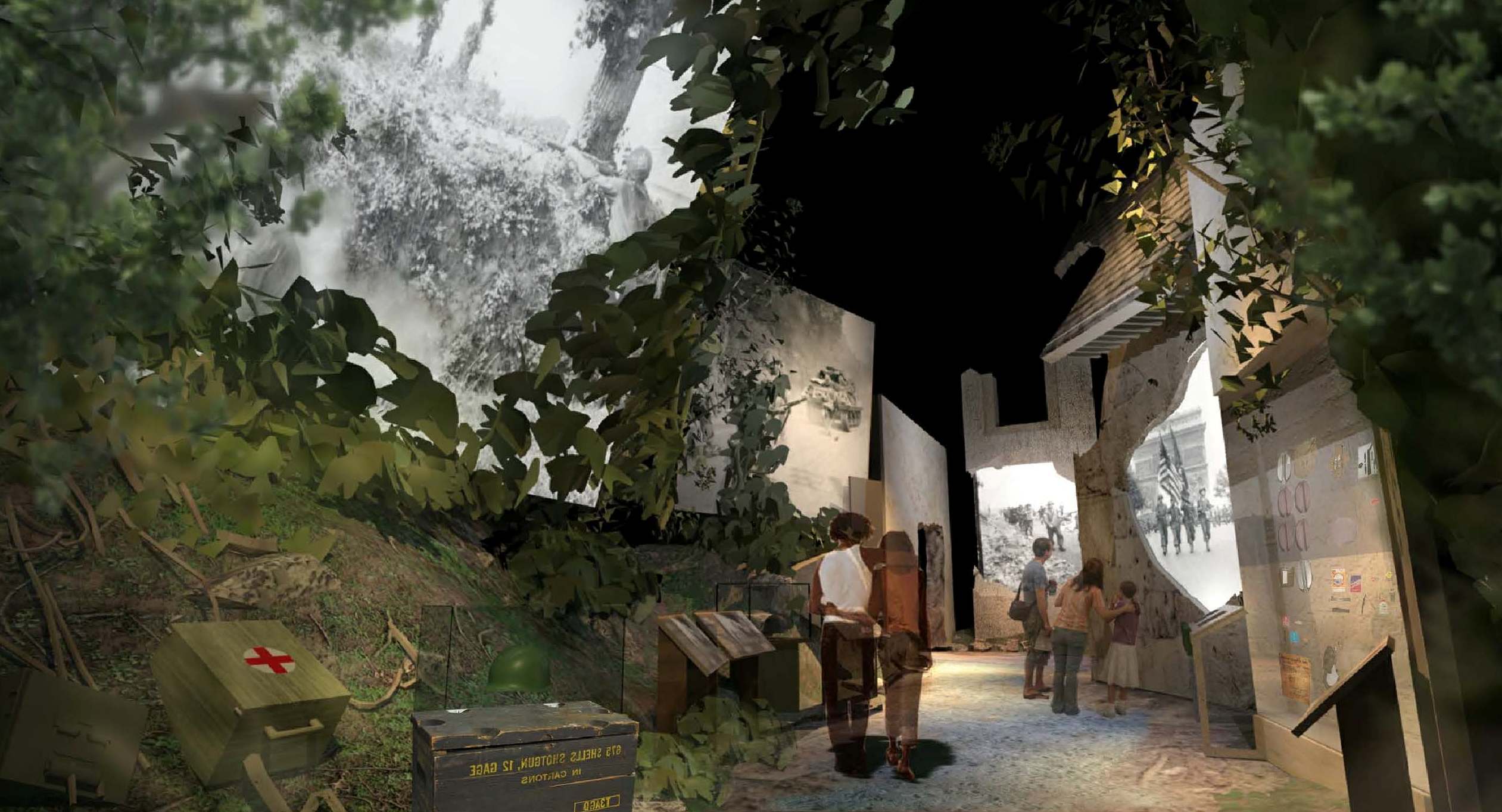 Rendering of the Northern Europe: Breakout and Liberation gallery

The breaching of Hitler’s Atlantic Wall and establishment of a secure beachhead in Normandy was followed by a campaign of dramatic highs and lows, wins, and losses.  After battling German troops in the hedgerow country and Normandy’s coastal towns, Allied forces broke through enemy lines and raced across France.  This gallery will immerse you in the obstacles experienced by the Allies – from the disheartening struggle amid the dense hedgerows, to the German counterattack at Mortain, to the major setback in Operation Market Garden.  Exhibits also will recall a successful amphibious assault in Operation Dragoon.  You will rejoice along the way as the Allies liberate Paris and finally push Germans back to their border. 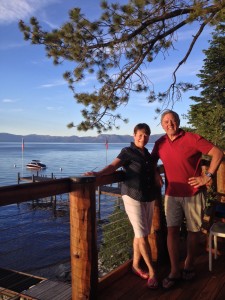 Jennifer and Phil Satre at Lake Tahoe on their 41st wedding anniversary,

The Northern Europe: Breakout and Liberation gallery has been made possible through a generous gift from Jennifer and Phil Satre in memory of his father, Sam Satre. Both California natives, Phil and Jennifer met when they were students at Stanford University.  Their parents were a part of “the greatest generation” and both of their fathers served during WWII.

Throughout her childhood, Jennifer’s parents, Pat and Patricia Arnold, often spoke about the war. Having already graduated from college, her father joined the Army Air Corps 5 months prior to the attack on Pearl Harbor. He was first sent to Cal Tech University for training in meteorology and then assigned to the 12th Weather Squadron in North Africa.  Jennifer says, “Mostly he talked about the wonderful camaraderie amongst the men and how much each soldier depended upon another.” He returned to the states and was decommissioned in the summer of 1945 as a major in the US Army Air Forces.

After the United States entered the war, Jennifer’s mother joined the American Red Cross and served in England at several different air bases. Jennifer has a collection of letters her mother wrote to her family which relate her work to boost the morale of the soldiers while on base.  This involved a variety of activities such as establishing the base donut-coffee shop, planning parties, and corresponding with the families of hospitalized soldiers. Jennifer remembers her mother telling her about the tension and, often, sadness that came with standing at the air field and counting the planes as they returned from missions.  According to Jennifer, “Regardless of whether or not our parents talked about the war, our generation was really shaped by our parents’ experiences during WWII.”

Sam Satre, a farm boy from Minnesota, met June Sterling in Menlo Park, California, while he was on leave from his service in the US Calvary in mid November 1941.  According to Phil’s mother, it was love at first sight and they were married soon after the attack on Pearl Harbor.

Phil’s father had been in the cavalry for two years when the US involvement in WWII began to gain momentum. The cavalry that he was a part of evolved into the 997th Field Artillery Battalion of the US Army. On the evening of June 26, 1944, Phil’s father landed on Omaha beach and participated in the Normandy Invasion. He also fought later in the Battle of the Bulge. After the victory in Europe, his unit was moved to Czechoslovakia to retrain for deployment to Japan. However, with the end of the war in the Pacific, he returned home in 1945 to California and enrolled at Stanford on the GI Bill. Phil was born while his father was in school.

Although Phil’s father did not speak of his wartime experiences, this began to change when his father attended a reunion of his army unit nearly 30 years later. Prior to that gathering, Phil had never known that his father landed at Normandy.

Jennifer shared that “Phil’s mother could write a book about what it was like to be a WWII bride with a child back home.”  Phil’s mother followed his father around to all of his assignments until his unit went to England, and then stayed home and took care of Phil’s sister. Phil’s mother still has all the letters Sam wrote to her while he was away. Phil has never read their letters, but Jennifer has. “All they say is how much they love each other. Phil’s father couldn’t say much more than that, so there is not a lot of information. Just ‘I miss you.’” Phil’s mother turns 92 this July.

Shortly after his father passed away, Phil began to learn more about World War II through movies such as Saving Private Ryan and from reading Stephen Ambrose’s books, in particular D-Day and Citizen Soldier. A couple of years after the Museum opened, Trustee Boysie Bollinger led an effort to create a national board, expanding the scope of leadership with people who lived outside of Louisiana. It was at this time that Phil was approached, and after meeting with Museum President and CEO Nick Mueller in 2002, Phil joined the Board of Trustees. Phil reflected on his commitment to the Museum, “It has been twelve years since I joined the board and it has been a great experience. It has also been a lot of hard work, but I think we are all very proud of how the Museum has evolved and how it has become such an important part of the telling of the story of World War II.”

Phil’s father also took part in the liberation of the death camps in Europe. Phil still has photos that his father took during that time, which he describes as quite gruesome. He feels these photos “reiterate how awful that experience was and what liberation meant to the people that survived.” For those reasons, Jennifer and Phil felt it was a privilege and an honor to sponsor the Northern Europe: Breakout and Liberation gallery in Phil’s father’s name.

Jennifer and Phil have also generously sponsored the Okinawa exhibit within the Road to Tokyo, the second floor Pacific Theater Galleries within Campaigns of Courage: European and Pacific Theaters. This floor is scheduled to open in 2015. They have named the exhibit in memory of two of Phil’s uncles, Gail Donald Sterling and Vern Patterson Sterling. Gail and Vern enlisted together and both participated in the First Marine Division invasion of Okinawa. They both survived WWII and Phil knows that both of his uncles were very proud of their service in the Marines. When Phil and Jennifer saw that the Museum was building the Road to Tokyo, he wanted to acknowledge their role as Citizen Soldiers.

In terms of their own philosophy for philanthropy, Phil and Jennifer explained:

There are two things that are crucial. One is that we believe that the mission of the organization is an important one. We have strong feelings about our parents and our families’ participation in the war effort, whether on the Home Front or in uniform. The need to have a Museum that tells the American Experience in WWII, the war that changed the world – why it was fought, how it was won, and what it means today – is something that resonated with us. Almost as important is a confidence in the leadership of an organization. The leadership means not only the Board of Trustees but also Nick Mueller and his staff and all of the people, including volunteers, involved on a day-to-day basis in operating the organization. We always had confidence that they could execute the mission successfully because they had the work ethic and qualities of leadership to make The National WWII Museum a reality.

​I think that when you make a donation to an organization, you want to feel as good or better about that donation as the recipient organization. You should be happier than they are to be able to support them. We feel that way about the support that we give to The National WWII Museum. 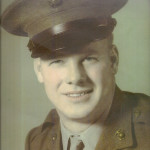 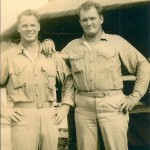 Gail D. Sterling and a friend 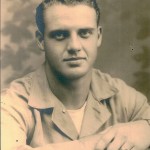 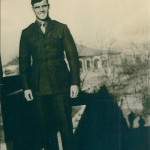