COUNTDOWN TO ROAD TO BERLIN – EXHIBITS WITHIN THE NORTHERN EUROPE: BREAKOUT AND LIBERATION GALLERY

In last week’s blog post of the Road to Berlin countdown, you learned about the story of the story of the Allies experiences in France in WWII in the Northern Europe: Breakout and Liberation gallery. This week, let’s explore the content of the gallery’s first two exhibits: Pushing Beyond the Beachhead and Race Across France.

You will also learn the story of Frank Denius, a WWII veteran who, along with the Cain Foundation, has generously sponsored the Race Across France exhibit In Honor of The Men of The 30th Infantry Division.

PUSHING BEYOND THE BEACHHEAD

Made possible through a gift from the Collins C. Diboll Private Foundation

This exhibit will explore the many unexpected obstacles that the Allies faced as they moved inland into France. The British and Canadian forces attempted to advance from Gold, Sword, and Juno beaches, but were stalled by fierce enemy resistance outside Caen.  At the same time American forces were struggling through the bocage, a region of compact fields and tall, dense hedgerows that proved ideal defensive terrain for the Germans. Pushing Beyond the Beachhead will convey how the Allies still faced a deadly fight in the weeks after D-Day, and how they slowly advanced forward to the port of Cherbourg and the town of Saint-Lô through grim determination. 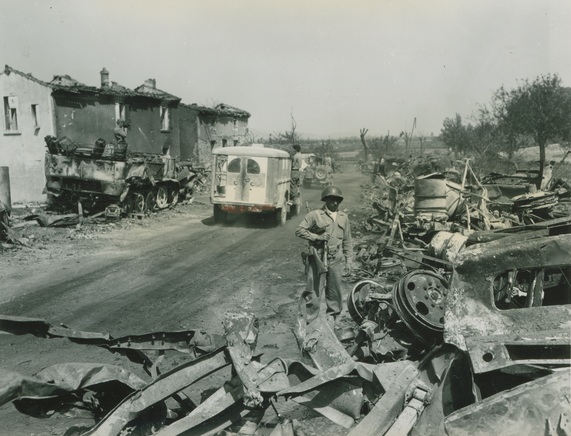 Soldier stands alongside the rubble of the town of Loriol-sur-Drome, France on September 3, 1944. U.S. Army Signal Corps photograph, Gift of Regan Forrester, from the collection of The National WWII Museum. 2002.337.896

Race Across France will tell the story of how American forces battled for weeks to break through the Normandy hedgerows before launching Operation Cobra on July 25, 1944.  Allied bombers took advantage of our air superiority in a massive strike that hit some of our own troops but also paralyzed the German defenders, allowing American troops to suddenly punch through the German lines near Saint-Lô and overwhelm the stunned enemy. General George Patton’s Third Army spearheaded the race across the French countryside, determined to encircle the rapidly retreating enemy in the pocket at Falaise. The exhibit will convey the resolution of the Allied Forces as units poured through the opening, broke out into the open terrain, and doggedly closed in on the Germans through fierce fighting. 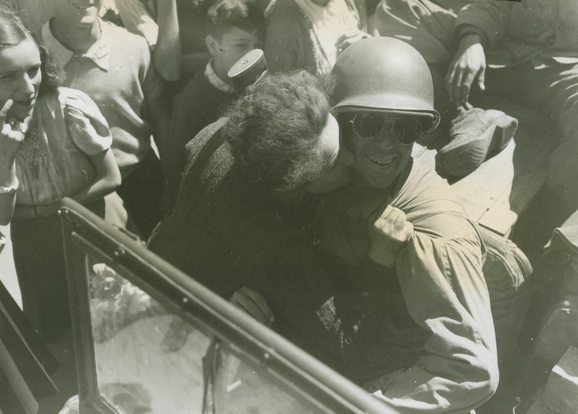 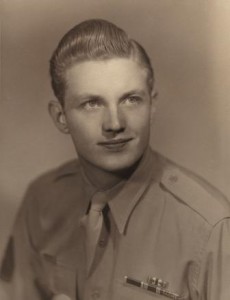 The Race Across France exhibit has been made possible through a generous gift from Frank Denius and the Cain Foundation In Honor of The Men of The 30th Infantry Division. Franklin W. Denius spent his childhood in the small town of Athens, Texas. As a teenager he attended a military prep school, Schreiner Institute in Kerrville, and then at the age of 17 he enrolled at the Citadel in Charleston, South Carolina (under the U.S. Army’s educational program). Within a year, he entered active duty on June 3, 1943. After training as a forward artillery observer, an especially dangerous job that required operating between friendly and enemy lines, he was assigned to the 30th Old Hickory Infantry Division.

Frank arrived in England in February 1944. On June 7, 1944, his unit waded ashore at Omaha Beach and went into action providing fire support for the 29th Infantry Division for six days, then his artillery battalion returned in support of the 30th Division. On July 17, 1944, his observer party came under enemy fire, and his commanding officer was killed. He took command of the situation and began calling in fire, and the 30th Infantry Division overcame the German opposition.

In August, he found himself and 700 other men surrounded by a German counter-offensive designed to split Allied forces. For six days, they resisted the German counterattack from atop Hill 314 during the Battle of Mortain. He was calling fire missions almost non-stop for 72 hours and stopped the Germans. When they were finally relieved only 376 of the men came down that hill, as roughly half the American defenders were killed or wounded.

In December 1944, Frank’s unit was in Belgium during the Battle of the Bulge and found itself in the path of another German offensive. Frank said he disobeyed an order to withdraw, and began calling for fire that repelled a German Panzer attack. Although wounded by German rocket fire on January 25, 1945, he fought through Germany until VE-Day and came home in August 1945. Frank fondly remembers returning home from the War as an honored member of the 30th Division on the Queen Mary, enjoying a private room with a real bed and a working shower.

He then returned to Texas and was discharged in San Antonio at Fort Sam Houston on October 2, 1945.  He has been awarded the Purple Heart twice and the Silver Star a total of four times. While some of his medals were awarded in public ceremonies in France, in 1954 he recalls “receiving a box full of medals from the Department of Defense at my doorstep that I did not even know I had received.” Through the GI Bill he was able to attend the University of Texas and earned degrees in business and law.

Frank’s first contact with The National WWII Museum came through the newspaper. He was told there was an article in the newspaper about Andrew Higgins, who manufactured the boats that Frank had used to land on the Normandy beaches. He read the article and learned more about the location of the Higgins factories and that New Orleans was a natural site for what was then the National D-Day Museum.  In the mid 1990s, Frank attended a lecture by Museum co-founder Stephen Ambrose at the University of Texas campus, in which the historian discussed D-Day and the campaign to build the Museum.

Frank serves as President of the Cain Foundation, which has generously sponsored the Race Across France exhibit Frank toured the exhibit space in its earliest stages last winter and shared that, “having seen it in the raw with all the cables hanging around, I know it is going to be wonderful and I am looking forward to seeing it when it opens.” 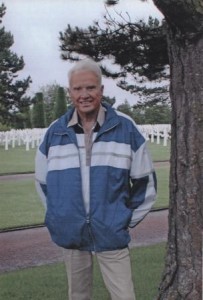 We are very thankful that Frank and the Cain Foundation chose to honor the 30th Infantry Division through a gift to The National WWII Museum. Frank wants those men “to be forever acknowledged for their tremendous roles in the battles they fought. The 30th Infantry Division deserves the recognition for their service in WWII for all generations to come. Every generation of Americans will have to pay a price for freedom, and the 30th is a good illustration of the price that those guys paid in their generation.” His regiment was nominated for a presidential citation for its exemplary service during the Allied advance, including a vital role in all five major battles of the European Theater:  Normandy, Northern France, Central Europe, Ardennes/the Battle of the Bulge, and Rhineland, Germany.

Frank supports The National WWII Museum to “memorialize the brave men and women of WWII and honor the freedom that America provides to new generations. The Museum will give them a patriotic feeling that I think no other experience will do.”

We are privileged at the Museum to be able to honor the 30th Division in the Race Across France exhibit within Campaigns of Courage: European and Pacific Theaters and benefit from the Cain Foundation’s generous support.  We are thankful for the partnership of Frank Denius and the Cain Foundation in honoring the Citizen soldier and preserving the story of the 30th Infantry Division for generations to come.

Next Up- The remaining exhibits within the Northern Europe: Breakout and Liberation gallery and the story of the donor who generously supported them, the Collins C. Diboll Private Foundation.