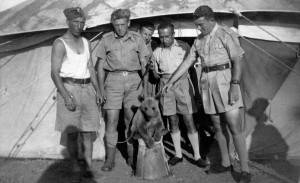 Image Courtesy of The Polish Institute and Sikorski Museum

70 years ago today, on May 11, 1944, the Fourth and final Battle of Monte Cassino began as the U.S. Fifth Army and British Eighth Army attempted to smash through the fortifications of the German Winter Line.  Serving within the British Eighth as part of the attack were units from throughout the British Empire and Commonwealth as well as several formations composed of exiles from Nazi-occupied nations.  One such formation was the Polish II Corps on the British right flank, among whose ranks marched a most unique soldier.

Rescued in the mountains of Iran as a cub in 1942 and adopted by the Twenty-Second Artillery Supply Company of the Polish II Corps, Wojtek – a Syrian Brown Bear whose name means ‘smiling warrior‘ – traveled with Polish forces throughout the Middle East and North Africa, doubling as both mascot and morale booster.  Polish II Corps servicemen quickly taught the young Wojtek how to salute and to wrestle as well as how to smoke and eat cigarettes and to drink beer.  However, unlike other mascot animals who were not permitted to accompany soldiers into combat, Wojtek made the journey from Egypt to Italy alongside the Polish II Corps after being officially drafted into the Polish Armed Forces in the West with the rank of Private; the Poles even going so far as giving the bear his own paybook and serial number. 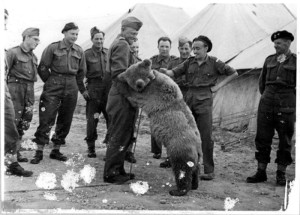 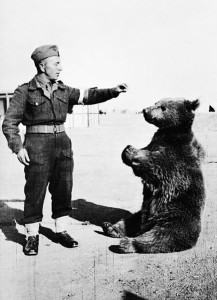 Though stories of Wojtek driving supply trucks and carrying ammo crates into battle are no doubt apocryphal, Wojtek was with the men of the Twenty-Second Artillery Supply Company during the hard fighting at Monte Cassino:  the bear’s popularity being recognized in the battle’s aftermath by a new unit emblem depicting Wojtek carrying an artillery shell.  Wojtek would survive the Italian Campaign and the war, retiring to the Edinburgh Zoo where he lived until 1963, inspiring children’s books, several documentaries, an official brand of Wojtek beer as well as a memorial statue in the Polish city of Krakow set to be unveiled later this year.

For more stories on mascots and service animals in WWII, purchase Loyal Forces:  The American Animals of World War II.