On Saturday, April 12, 250 middle and high school students from all across Louisiana arrived at The National WWII Museum for the National History Day State Contest. Months of research and planning went into these students’ projects which were conducted on historical topics of their own choosing. Many of the students selected their topics in the fall and then spent much of the spring conducting research online, in libraries and at historical sites and archives. With the option to create either an exhibit, a documentary, a performance, a website or a documentary, students could display their research in the way they deemed most effective.

The theme of the Contest was “Rights and Responsibilities in History,” and to address this theme, many students chose topics focused on civil rights issues, labor struggles and the history of gun control. Each student’s project was reviewed by a panel of judges, and students were granted 15 minutes to answer questions related to their research process.

The top 2 entries in each category were selected to represent Louisiana at the National History Day Contest to be held at the University of Maryland from June 15-19, 2014. 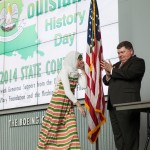 Hadeel Kasji after hearing that her exhibit advanced to the National History Day Contest. 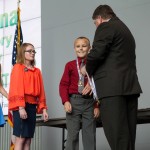 Dylan Bennett, Sarah Aviles and Theresa-Anne Sklar advanced to the National Contest with their exhibit on the Cristero War. 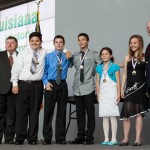 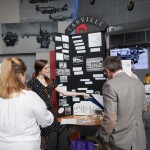 Hannah Adams discusses her exhibit on the history of Hansen's Disease in Louisiana. 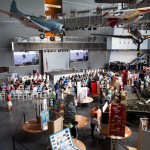 Exhibits and preparation for the Award Ceremony in the US Freedom Pavilion: The Boeing Center 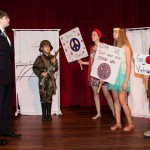 Cole Conrad, Ben Ellender, Brayli Wix, Jill Elliot, and Will George act out a scene from their performance on the Vietnam War era. 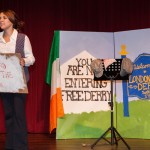 A performance on "Bloody Sunday" by Zoe Zemmels 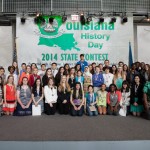 2. Zoie Spears
Effects of Apartheid on the Status of Women in South Africa
Math, Science and Arts Academy-West

1. Lye Bordelon-Walker
The Fall of the Wall
Runnels School

1. Zandra Zemmels
Viewer Discretion is Advised: The Rights and Responsibilities of the MPAA
Lusher Charter School

1. Madison Russell, Jessica Staggs
Vichy France: The Complexity of Humanity’s Past and the Implications that Individual Choices Have on Others & The Future
Northwestern Middle School

1. Austin Farrow
Behind the Beret: The Other Side of the Story
Caddo Magnet High School

Ryann Beard
No Right to Leave: Living in Carville
Catholic of Pointe Coupee

Matthew Foltz
The Second Amendment: Both the Rights it Bestows and the Responsibilities it Requires
Louisiana Virtual Charter Academy