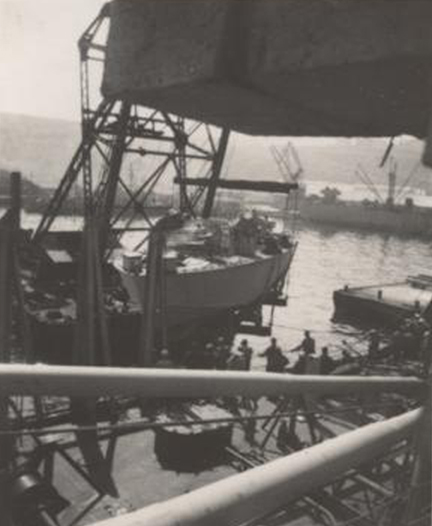 Seventy years ago, on 21 April 1944, PT-305 arrived in the Mediterranean. Motor Torpedo Boat Squadron 22, or RON22, was transported to the combat theater aboard the USS Merrimack. According to the deck log of PT-305, she was kept on board the Merrimack for several days, anchored in the port of Mers El Kébir in Algeria until 25 April. Lt. W.B. Borsdorff wrote: “1825: Put over side into water by U.S. Army and moored portside to alongside USS Merrimack.”

The squadron spent about three months in Miami, Florida for shake down and training.  The training included all aspects for which the boats were designed:  torpedo firing, gunnery practice, speed trials and boat handling maneuvers.

In preparation for over-seas duty the boats were dry-docked, freshly painted, and all systems were checked out thoroughly.

To avoid the rough water off of Cape Hatteras, we once again took the intracoastal waterways north to Norfolk.  PT 305 and three other boats were placed in cradles on the deck of a navy tanker.  The tanker joined a large convoy of other ships for an Atlantic crossing; then through the Straits of Gibraltar and into the Mediterranean Sea.  The tanker anchored in the harbor at Oran, Algeria on the north shore of Africa.

There was only one crane in Oran with the capability to pick up a 70+-ton PT boat so we had to wait two weeks to be off loaded into the water.  We took the boats from Oran, stopped in Algiers to re-fuel, and then on to Bizerte in Tunisia.

Click here to learn more about PT-305 and her restoration here at The National WWII Museum.