Kwajalein Atoll in 1943. Courtesy of US Army.

The Battle of Kwajalein, fought 70 years ago from January 31 to February 3, was a decisive victory for the US in its island-hopping campaign. The successful amphibious assault on the Kwajalein Atoll, part of the Marshall Islands, allowed US invasion forces to speed toward the Eniwetok Atoll, landing on February 17, 1944.

Kwajalein is a coral atoll, characterized by narrow islands ringing a shallow lagoon. Atolls form when a volcanic island slowly subsides into the ocean with the rich volcanic soil nourishing coral in the surrounding waters. Colonies of coral, a tiny filter-feeding relative of the jellyfish, secrete calcium carbonate exoskeletons which eventually form the stony coral reef. Kwajalein is one of the largest coral atolls in the Pacific with over 6 square miles of land ringing and an almost 850 square mile lagoon.

Coral reefs flourish in the warm, shallow lagoon waters of atolls. The reef ecosystem is extremely diverse and productive with the reef providing habitats for a variety of marine organisms including tropical fish, crustaceans, sea stars and sea turtles. Overfishing and pollution, along with rising sea temperatures and pH changes, threaten this delicate ecosystem.

Kwajalein Atoll in 1943. Courtesy of US Army. 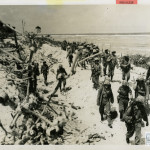 Marines on the march on a Kwajalein beach in 1944. US Navy Official photograph, Gift of Charles Ives, from the collection of The National WWII Museum. 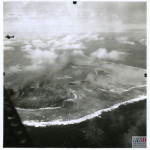 Aerial view of Kwajalein shows landing craft approaching in 1944. US Navy Official photograph, Gift of Charles Ives, from the collection of The National WWII Museum. 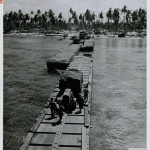 A floating highway of pontoon sections leads from an LST to the shores of Kwajalein Atoll in the Marshalls on January 31 – February 2, 1944. US Navy Official photograph, Gift of Charles Ives, from the collection of The National WWII Museum.