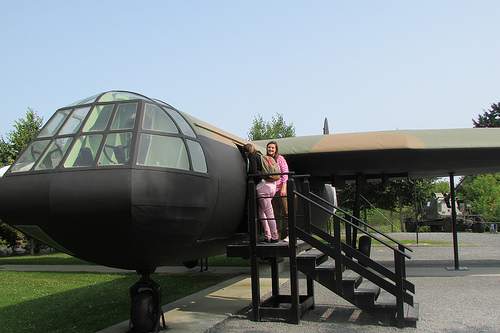 A recreation of a Horsa Glider at the Pegasus Bridge Museum

The 2014 Normandy Academy will take high school and college students from the pages of history to the beaches and battlefields of Normandy. Students will take an 8 week online course through Nicholls State University that will prepare them to think critically about the causes, events and outcomes of D-Day. Following the course, students will arrive at the Museum to examine documents and artifacts relating to the invasion and its aftermath. Finally, students will spend six days in Normandy following in the footsteps of the soldiers, viewing monuments and museums and interacting with locals.

The first full day of touring will take the students to the eastern flank of the invasion. The day begins with a tour of Pegasus Bridge, the first Allied objective captured on D-Day. In the early morning hours of June 6, 1944, Horsa Gliders under the command of Major John Howard of the British 6th Airborne Division landed in fields only several yards from the bridge.  The operation went so smoothly that the element of surprise meant that there was very little German opposition. Howard’s men would repel a small counterattack later that morning, and reinforcements arrived to ensure that the Germans could not retake or destroy the bridge.

The next stop is the Grand Bunker Museum in Ouistreham. The museum is itself an artifact as it was the Fire Control Tower for the area around Sword Beach. The tight spaces inside the bunker reveal the dangerous combat that awaited soldiers as they stormed the beaches in the morning hours. From the observation room, students can look out over the English Channel through a stereoscopic range finder.

After a picnic lunch in Arromanches and a view of the remains of Mulberry “B,” students will view the film Normandy’s 100 Days in the Arromanches 360° Circular Cinema. Featuring archival footage on nine high definition screens that surrounds each viewer, quotes from military leaders in several languages narrate the action. 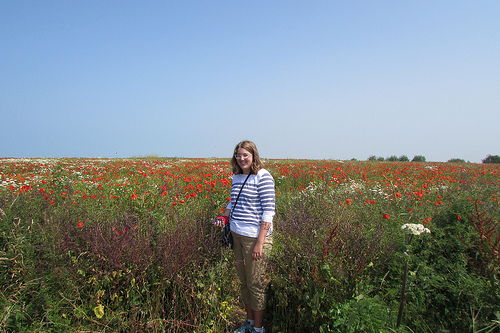 A poppy field near the artillery battery at Longues sur Mer

The last site visited is the remnants of a German artillery battery at Longues sur Mer. This is the only German battery in Normandy with the 152 mm guns still in place. This battery engaged in a long duel with British ships on June 6, as the last intact gun continued firing well into the evening. Adjacent to the guns, a field of poppies may be seen depending upon the spring weather in Normandy. After a bus ride back to the hotel, dinner will be enjoyed in small groups at local restaurants.