As civilian manufacturers shifted to wartime production, American toy manufacturers went above and beyond to answer the government’s call. With the introduction of General Limitation Order L-81 on March 30, 1942, the production of metal toys essentially came to an abrupt halt. By the Christmas of 1942 metal toys were extremely rare, making the presence a new model train set under the Christmas tree very unlikely.

However, toy makers used creativity and ingenuity to continue to provide children with toys during wartime. Non-strategic materials like wood, paper and fiberboard replaced metal and rubber in most toys. While some toy manufacturers continued to produce toys, others shifted entirely to war production. The A.C. Gilbert Company, designer of the popular Erector set, and Lionel, the well-known model train maker, both produced instruments for the US Navy. The A.C. Gilbert Company made an Anti-Aircraft Range Indicator while Lionel made precision navigation instruments for the including compasses and compass cases.

Children were encouraged by Lionel to plan their postwar railroad by building a paper train.  The hard-to-assemble model consisted of 250 punch-out parts requiring no adhesive and moved by pasteboard wheels turning on wooden dowels. While the paper train was not an overwhelming success with consumers, Lionel continued to improve their electric train and postwar unveiled an array of innovative new designs. 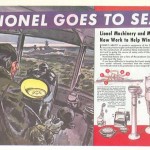 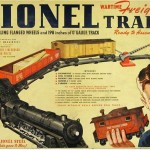 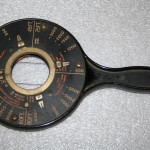 Anti-Aircraft Range Indicator made by the A.C. Gilbert Company. The National WWII Museum, 2004.106.001 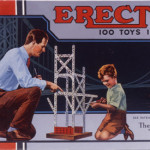