Seventy-two years ago this month, Japanese forces conducted a surprise attack on the U.S. Naval Base at Pearl Harbor. The anniversary of this event provides us with an opportunity to explore how the United States government used Pearl Harbor in its propaganda. Imagery, powerful statements and emotional appeals rallied Americans to join the fight against the Axis Powers. A closer look at two propaganda posters featuring Pearl Harbor is a great way to learn more about American motivations for fighting in World War II and the use of successful propaganda techniques for gaining public support.

The Office of War Information (OWI) was established in June 1942 to create and oversee programs that were designed to promote an “understanding of the status and progress of the war effort and of war policies, activities, and aims of the U.S. government.” Pearl Harbor was a popular topic, and OWI produced many propaganda posters that evoked this event to stir patriotic feeling.  One of the most powerful depictions of the attack was this poster, “Remember Dec. 7th!” (below) 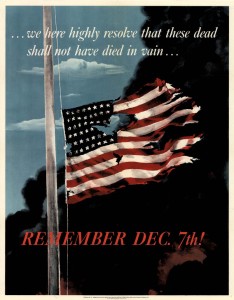 Come to the Museum to see “Remember Dec. 7th!” and other propaganda posters on display in our new “We Can…We Will…We Must!” exhibit.

This dramatic poster features a tattered flag at half-mast against a background of smoke and flames, caused by the dropping of Japanese bombs on U.S. Navy ships and base installations. The image is heightened by a quote from Abraham Lincoln’s Gettysburg Address delivered in 1863. Many Americans would have recognized the origin of these famous words and identified positively with the sentiment behind Lincoln’s words (that the country would continue to honor the heroic men who died by fighting to win the war and avenge their deaths) and connected this feeling to support the current cause (fighting for victory in WWII).

Now, take a look at these two posters and try to answer the following questions. 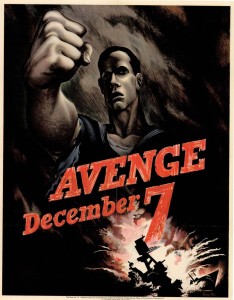 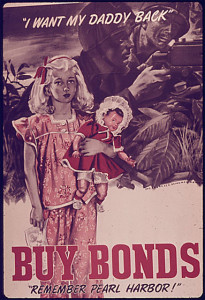 “‘I Want My Daddy Back!’ Buy Bonds” poster