The Benefits of Studying Abroad in Normandy

In the summer of 2014, The National WWII Museum will again offer high school and college students the opportunity to study in Normandy. The trip has been called a “life-changing” moment by previous students. Past participant Sara Allen believes the trip is “making sure some of the best stories aren’t forgotten.”  The stories she is referring to are stories of leadership like that of Sgt. Leonard “Len” Lomell finding his way through the hedgerows to destroy German artillery after climbing the cliffs of Pointe du Hoc. She is also referring to stories like that of two American combat medics who set up in a church in the town of Angoville au Plain and administered treatment regardless of uniform as long as no weapons came into the church.

The highlight of the trip for most students was the visit to the Normandy American Cemetery. Overlooking Omaha Beach, the cemetery contains the graves of 9,387 of our military dead along with 1,557 names on the Wall of the Missing. The Normandy Academy students began their trip to the cemetery by helping to raise the flags before embarking on a special tour that saw each student honor a specific soldier. Summarizing the feelings in the cemetery, one student remarked, “It really hit home for me when I saw all of the graves and knew that each grave represented one brave man who risked his life.”

In addition to the lifelong lessons in leadership, service and sacrifice, the students were prepared for college through a reading and mentoring program. One participant remarked, “Instead of saying, ‘I went to St. Mére-Église,’ I now can explain how not only did I go there, but that I understood the soldier’s sacrifice and what it took to do what they did.” Another said that the importance of the location and significance of her task helped her overcome her fear of public speaking when she gave a briefing in the Normandy hedgerows. “Giving a talk, on a topic I was enthusiastic about, and, more importantly, that I was personally tied to because it involved the story of my soldier, in the place that the fighting occurred, was an incredible experience.”

In 2014, the preparation and mentoring program will be done in collaboration with Nicholls State University, and high school and college students can earn college credit through an online class. As students read works by Stephen Ambrose, Martin Gilbert and a primary account of Normandy by Dr. Harold Baumgarten, students will be working closely with the Museum and history professors to uncover the stories and significance of Normandy. 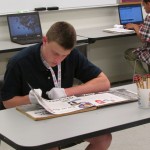 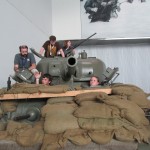 To understand the roles of a tank crew, students take positions inside a Sherman Tank at The National WWII Museum. 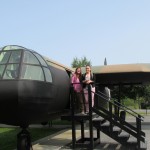 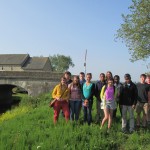 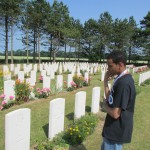 A British Cemetery in Normandy offers a contrast to the style of the American Cemtery. 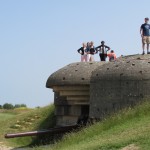 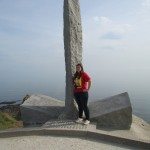 A monument to the US Rangers commemorates their ascent up the cliffs at Pointe du Hoc. 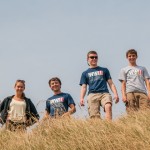 Normandy Academy students gaze out over the English Channel from the bluffs on Omaha Beach. 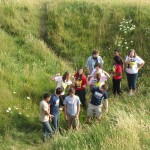 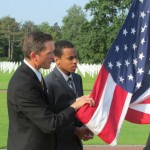 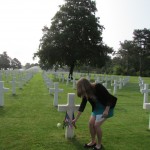 A Normandy Academy student lays a rose at the grave of a fallen American soldier.