I had the good fortune to participate in the planning and execution of a special exhibit and symposium the Museum held in 2007 When Baseball Went to War.  We were lucky to have with us many Hall of Fame and other great baseball players who were also World War II veterans. 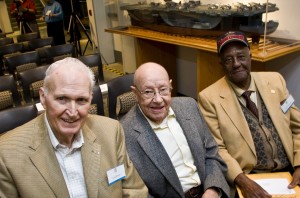 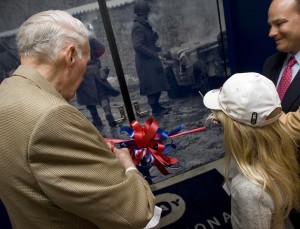 Their stories and camaraderie made it such a special gathering.  Because of our baseball focus, I had the chance to meet a veteran whose smile, kindness and twinkle in his eyes sticks with me today.  His name was Lou Brissie.  Lou was a pitcher and a patriot.

Gary Bedingfield, who runs a website Baseball in Wartime, was also at the conference with Mr Brissie and I and said it best:

The fact that Lou Brissie ever stepped foot on a baseball diamond again after World War II, let alone pitch in the major leagues, is a testament to this man’s sheer determination, courage, and will.

Learn more about his story in wartime, the major leagues and how he went about his life with an incredible disposition.  Read his obituary from the New York Times.  I feel fortunate to have spent just a short time with him.  Lou was a great man.