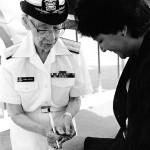 Commodore Grace Hopper, USNR, autographs a “nanosecond” on September 27, 1985. Image courtesy of US Navy, from the collections of the Naval Historical Center. 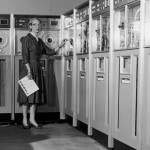 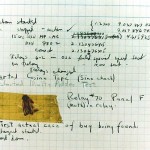 The first “computer bug” found by Grace Hopper between relay points of the Mark II computer on September 9, 1947. Image courtesy of the Naval Surface Warfare Center.

Today is Ada Lovelace Day, an international celebration of the achievements of women in science, technology, engineering and mathematics, affectionately known as STEM. Named for the founder of scientific computing, Ada Lovelace was a visionary mathematician credited with writing the first computer algorithm. The Countess of Lovelace worked closely with Charles Babbage, inventor of a calculating machine known as the Analytical Engine. She speculated that Babbage’s machine might be applied beyond numerical calculations, recognizing that numbers could be used to represent other quantities like symbols or musical notes and marking the critical point in the transition from calculating to computing.

During World War II many women used their mathematical skills to serve their country, from ballistics research to the Manhattan Project. One American woman in mathematics towers above the rest, Rear Admiral Grace Murray Hopper. Dr. Hopper worked on both the Mark I and Mark II computers at Harvard University. It was during her tenure at Harvard that she located the cause of a computer malfunction, removing a moth trapped between relay points in the Mark II. Hopper affixed the insect to her log book earning her credit for coining the term, “computer bug.”

Dr. Hopper worked on early computer projects, including the ENIAC and UNIVAC, developing programming languages. It was her business programming language, COBOL, which expanded computing and data processing beyond science and into mainstream commerce. Hopper’s innate ability to explain scientific phenomena endeared her to many, from engineering students to generals. During her lectures she used nanosecond visual aids, telephone cable cut into 11.8 inch lengths, to represent the distance that light waves travel in one nanosecond. Dr. Hopper famously handed a nanosecond to each listener to demonstrate the physical limitations of satellite communication.  Modern computing owes a great deal to Rear Admiral Grace Murray Hopper, a true pioneer of computing and a woman of great vision, tenacity and curiosity.