Time-lapse photographs taken by Voyager 1 show its approach to Jupiter over a period of 60 days. Images courtesy of NASA/JPL-Caltech.

Scientists announced Thursday the Voyager 1 has left the solar system and is now traveling in interstellar space, a monumental achievement in space exploration.  Launched on September 5, 1977 the space probe completed its primary mission, the exploration of Jupiter and Saturn on November 20, 1980.  The Voyager 1 provided the first detailed images of the two gas giants and their moons.  Designed by the Jet Propulsion Laboratory with its sister-probe Voyager 2, it uses a radioactive fuel source to power its instruments including a radio transmitter with a 12 foot diameter dish antenna.  Both Voyager probes carry gold-plated discs containing photographs of earth, spoken greetings in multiple languages and a collection of music intended for intelligent life forms that might find the spacecraft.

The origin of NASA’s Jet Propulsion Laboratory (JPL) can be traced back to World War II when it was established using funds from the US Army.  Early research focused on developing guided missile systems for the war effort.  The technology developed at the Jet Propulsion Laboratory during wartime eventually became tools for space exploration.   One of these vehicles of exploration, Voyager 1, has now reached the farthest from Earth of any man-made object.

Time-lapse photographs taken by Voyager 1 show its approach to Jupiter over a period of 60 days. Images courtesy of NASA/JPL-Caltech. 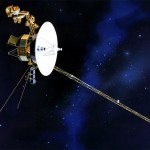 Image of Voyager 1 in interstellar space. Image courtesy of NASA/JPL-Caltech. 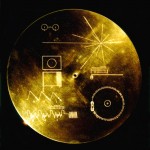 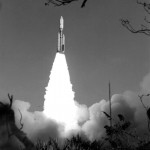