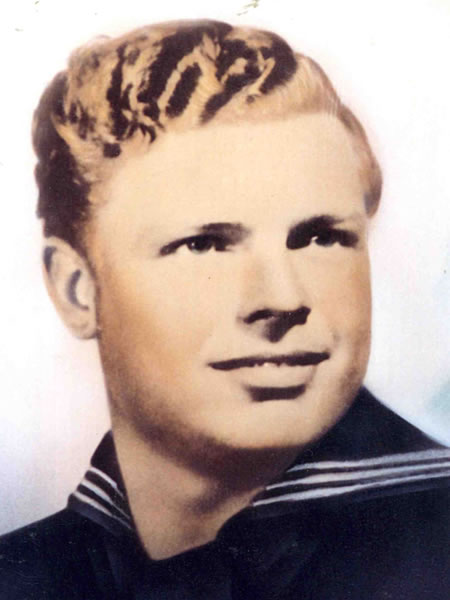 Today is the 70th anniversary of the death of Seaman First Class Johnnie Hutchins. Had he survivied WWII, Hutchins would be 91 years old. Hutchins received the Medal of Honor for his actions on 4 September 1943 off the coast of New Guinea. His medal, gifted to the Museum by the family of Johnnie Hutchins, is on display in the Museum’s D-Day in the Pacific exhibit.

The Medal of Honor citation for Hutchins reads:

For extraordinary heroism and conspicuous valor above and beyond the call of duty while serving on board a Landing Ship, Tank, during the assault on Lae, New Guinea, 4 September 1943. As the ship on which Hutchins was stationed approached the enemy-occupied beach under a veritable hail of fire from Japanese shore batteries and aerial bombardment, a hostile torpedo pierced the surf and bore down upon the vessel with deadly accuracy. In the tense split seconds before the helmsman could steer clear of the threatening missile, a bomb struck the pilot house, dislodged him from his station, and left the stricken ship helplessly exposed. Fully aware of the dire peril of the situation, Hutchins, although mortally wounded by the shattering explosion, quickly grasped the wheel and exhausted the last of his strength in maneuvering the vessel clear of the advancing torpedo. Still clinging to the helm, he eventually succumbed to his injuries, his final thoughts concerned only with the safety of his ship, his final efforts expended toward the security of his mission. He gallantly gave his life in the service of his country.

Our tribute to Hutchins, along with testimony from his brother, Harold, can be seen at Remember Them.