August 20th marks the 70th anniversary of the official establishment of The American Commission for the Protection and Salvage of Artistic and Historic Monuments in War Areas, known as the Roberts Commission. Under the chairmanship of Supreme Court Justice Owen J. Roberts, the Roberts Commission was an assemblage of art historians, museum officials, artists and professors charged with protecting art, artifacts and monuments in war-torn Europe from destruction and looting. 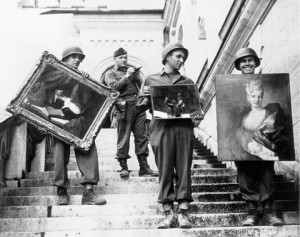 Monuments Men supervising the recovery of art and artifacts from Neuschwanstein Castle in Schwangau, Germany. Image courtesy of the National Archives and Records Administration.

At the outbreak of the war in Europe, museum curators and scholars on both sides of the Atlantic began to take steps to safeguard their most prized collections. In addition to potential danger from air raids and ground combat, these structures and artworks were also threatened by Hitler’s aggressive looting policy. Hitler coveted many of Europe’s greatest masterpieces for his Führermuseum, envisioned as the largest and most magnificent art museum in the world, located in his hometown of Linz, Austria. Through the duration of the war, Rembrandts, Raphaels, Vermeers, DaVincis and millions of other valuable pieces were plundered and hidden. Their final destination: to Germany or Austria for the Führermuseum collection.

Responding to this impeding crisis, the American Council of Learned Societies members drew up lists and prepared maps displaying the most culturally significant and important monuments and artifacts across Europe. These pieces were priorities to be protected from destruction, if military necessity allowed, and safeguarded from looters.

The Council, along with a group of Harvard professors and faculty, began to devise protection plans as the United States military planned an invasion of Europe. They took these plans to Supreme Court Justice Harlan Stone, board member of the National Gallery of Art. The proposal was brought to President Roosevelt, approved in June of ‘43, and the Roberts Commission was officially established in August.

The commission was charged to work as closely as possible with the US military, and special Monuments Fine Arts and Archives (MFAA) officers began training to be sent to the front lines.

As the Monuments Men arrived in Italy and eventually France, understaffed and with a minimal budget, they began to survey the damage to monuments and historic buildings. They coordinated initial repairs to ensure no further damage would occur to these culturally significant structures. MFAA officers also embarked on an extraordinary treasure hunt to recover the countless works of art stolen by the Nazis. These pieces were discovered in remote depositories across the continent: castles, countryside villas and salt mines.

Under the supervision of the MFAA officers, many of these works were returned to the rightful museums and still-living private collectors. Damaged buildings, including Monte Cassino, the Campo Santo and the Aachen Cathedral were rebuilt. However, thousands of artifacts were never claimed or could not be traced back to their original owner. Many pieces with unclear provenance from this time are in museum collections across the world. Museums are taking steps to investigate provenance and provide an open access database to the public.

Read the book that pays tribute to these remarkable and often forgotten group of monuments men and women, diligently told by Museum Trustee Robert Edsel: The Monuments Men: Allied Heroes, Nazi Thieves, and the Greatest Treasure Hunt in History. Watch Robert Edsel’s  Lagniappe Lecture about the Monuments Men from September 2009. Be sure to check out the movie based on the book, being released December 2013!