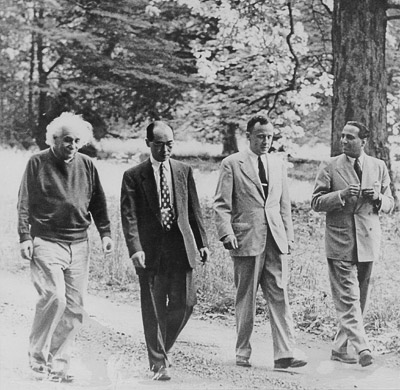 Atoms are made up of three types of subatomic particles, protons, neutrons, and electrons.  The first two, the positively charged proton and the uncharged neutron, exist in nucleus located at the center of the atom.  They developed the first model to explain how the nucleus of an atom splits concluding that a rare form of uranium, known as Uranium-235, was needed for nuclear fission.  Wheeler became the leading physicist in residence at the Hanford site of the Manhattan Project where he solved a problem with the production of plutonium, avoiding serious delays in the development of the atomic weapons that ultimately ended the war.

From the 1939 Wheeler-Bohr paper on the theory of nuclear fission. The graph shows the energy needed to begin nuclear fission (Ef). The square of the nuclear charge (Z) is on the X-axis and the mass number (A) is on the y-axis.

Following the war, Wheeler worked with Einstein in an attempt to develop a unified theory connecting the physics of the tiniest things in the universe with the physics of the largest things in the universe.  In addition to contriving the popular terms black hole and wormhole, Wheeler mentored a generation of influential physicists, including Hugh Everett and Richard Feynman.

John Archibald Wheeler earned his doctoral degree in physics from John Hopkins University at just 21.  He was a Professor of Physics at Princeton University from 1938 to 1976, later joining the physics department at the University of Texas.  Upon reflecting on his work on the Manhattan Project, Wheeler expressed regret in being unable to finish the bomb earlier, in time to save his younger brother Joe who died in combat in Italy in 1944. John Archibald Wheeler died at his home in Hightstown, New Jersey on April 13, 2008.  He was 96.