Students in the 2013 Normandy Academy spent two days studying and touring at The National WWII Museum. Each of the twelve students has chosen a fallen soldier from their home state to research and honor with a eulogy in the Normandy American Cemetery.

Before departing for France, the students studied the archival material from the collection of The National WWII Museum, went “Behind the Lines” of the Museum, met author Cate Lineberry, and talked with two World War II veterans, including Tom Blakey, a veteran of the 505th Parachute Infantry Regiment.

One thing that really struck me was hearing Tom talk briefly about coming upon a concentration camp in Germany towards the end of the war, and knowing immediately that that was why he was, and the army was over there, after having asked that the entire war.  I had read similar statements many times before, but hearing it from the mouth of someone who was actually there made it very real to me.  He also talked about how his volunteer work with the museum helped him to deal with symptoms of post-traumatic stress and the bitterness he felt after the war.  His testimony to the power of the volunteering in working through his issues was very powerful to hear.

While being led on a special behind the scenes tour of the Museum, the students went inside a Sherman tank to get a feel for the cramped conditions inside. This was a unanimous highlight for all the students.

Another inspirational moment came when author Cate Lineberry talked to the students after her lecture about her recent book, The Secret Rescue: An Untold Story of American Nurses and Medics Behind Nazi Lines. Each student received an autographed copy of the book. 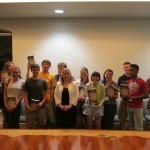 Normandy Academy students pose with author Cate Lineberry after they each received a copy of her book, The Secret Rescue: An Untold Story of American Nurses and Medics Behind Nazi Lines. 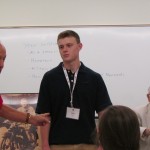 Clyde Hurst is used as an example of a fresh-faced replacement paratrooper in WWII. 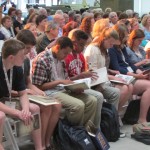 The Normandy Academy students attended a presentation by author Cate Lineberry about her book, The Secret Rescue: An Untold Story of American Nurses and Medics Behind Nazi Lines. 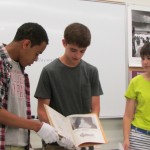 London Westley, Andrew Beam, and Rebekah Bass find evidence of a segregated prom from a 1944 yearbook from Topeka, Kansas. 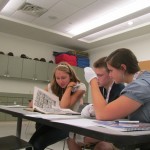 Rebecca Andruzzi, Clyde Hurst, and Sara Allen examine the lives of teenagers during WWII with a 1944 yearbook from Chicago. 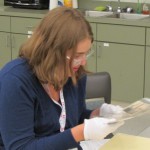 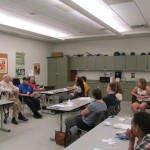 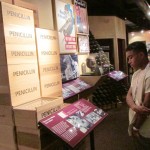 Carey Burton of Chicago learns the importance of Penicillin during WWII. 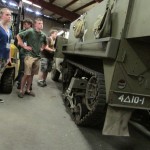 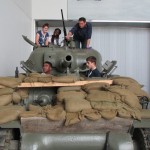 Curator Larry Decuers instructs the Normandy Academy on the roles of a Sherman Tank crew. 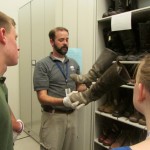 Curator Eric Rivet tells the story behind this pair of German boots worn by Franz Goeckel on D-Day.

After arriving in Paris, the Normandy Academy students will head for Caen, France and then Normandy sites such as Pegasus Bridge, Omaha Beach, and Pointe du Hoc. Their time in Normandy will culminate with the eulogies in the Normandy American Cemetery on Thursday, July 18.