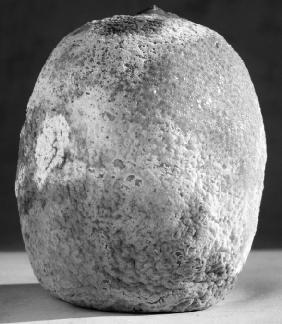 In June of 1943 Mary Hunt, a lab assistant working in Peoria, Illinois, found a cantaloupe at a local market covered in mold with a “pretty, golden look.”  This mold turned out to be a highly productive strain of Penicillium chrysogeum and its discovery marked a turning point in the quest to mass produce penicillin.

During the first half of 1943, American pharmaceutical companies made 400 million units of penicillin – enough to treat approximately 180 severe cases of infection.  During the second half of 1943, 20.5 billion units were produced.  By D-Day on June 6, 1944, production increased to a staggering 100 billion units per month.  Thanks to one very special summertime cantaloupe, penicillin quickly became a “miracle drug” saving countless lives from once deadly infections.

Check out our Penicillin Lesson Plan to learn more about the Allied effort to mass produce penicillin.