Seventy Louisiana students spent the week of June 10, 2013 at the University of Maryland competing in the 2013 National History Day Contest. They brought with them their research papers, documentaries, exhibits, performances, and web sites. These finalists earned their trip by qualifying at the Louisiana State History Day Contest held at The National WWII Museum in April. After spending months researching, designing and perfecting their projects, Louisiana’s student delegation arrived ready to defend their work in front of panels of judges from universities,  Smithsonian Institutions, and the National Archives.

At the Awards Ceremony on Thursday, June 13, Renee Trepagnier from Catholic School of Pointe Coupee in New Roads, LA learned that her exhibit, The Americans with Disabilities Act: The Turning Point to Equality, Justice and Civil Rights placed tenth in the nation in her category and won the “Outstanding Louisiana Entry” award. Renee’s finish was the highest ever for a Louisiana student.

In between their interviews, the students traded their commemorative Louisiana History Day pins for the pins from 56 other affiliates in an attempt to collect a complete set. Seven Louisiana students managed to complete the complete set by tracking down the elusive NHD-China, West Virginia, and North Dakota Buttons.

On Wednesday, June 12, Julia Vanchiere, Victoria Brooks and Ben Maxey from Loyola College Prep in Shreveport, LA brought their exhibit, The Vaccination of America, to the National Museum of American History for the NHD Exhibit Showcase. Julia, Victoria, and Ben spent the day talking to visitors from all over the world and handing out brochures describing the history of vaccination and how it became a turning point in world history. The students were then invited by Smithsonian curators to go “behind the scenes” to view more artifacts on vaccination history. 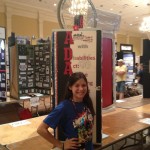 Renee Trepagnier finished 10th in the nation with her exhibit, "The Americans with Disabilities Act: The Turning Point to Equality, Justice, and Civil Rights" 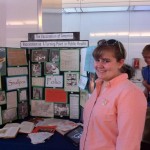 Julia Vanchiere at the National Museum of American History with her exhibit, "The Vaccination of America" 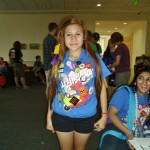 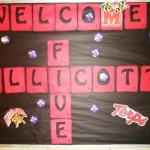 Ellicot Hall's 5th Floor served as Louisiana's home base at the University of Maryland. The students left their mark in the form of commemorative pins on the bulletin boards. 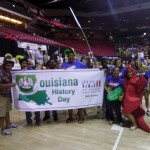 The Awards Ceremony always begins with banners, props and, in the case of Louisiana, a two-legged crawfish 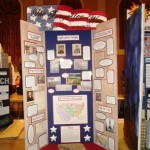 An exhibit on the War of 1812 and the Battle of New Orleans by Riley Bordelon, Brooke Glaser, and Nick Morel