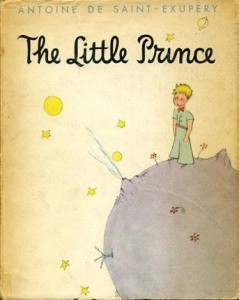 On this day 70 years ago, the beloved children’s classic Le Petit Prince (The Little Prince) was first published by French writer Antoine de Saint-Exupéry.  Written and self-illustrated in dreamy watercolors, Saint-Exupéry completed his most famous work while living in the United States where he had originally traveled in 1940 in an attempt to convince U.S. leaders to join the fight against fascism.  Both the most read and most translated book in the French language, The Little Prince incorporates significant portions of Saint-Exupéry’s life into its narrative.  An aviation pioneer during the interwar period, Saint-Exupéry, like the fictional aviator who encounters the titular Little Prince, had himself survived an actual crash-landing in the Sahara Desert in 1935 before returning to fly with the French Air Force against Germany in 1940.

Following the completion of The Little Prince, Saint-Exupéry returned to flying in 1943 with the Free French forces in North Africa, after endlessly petitioning for an age exemption as he was then forty-three years ago – eight years over the age restriction for flyers.  Sadly, only fourteen months after the publication of The Little Prince, Saint-Exupéry and the P-38 Lightning he was piloting would be lost in the waters of the Mediterranean south of Marseille, flying a reconnaissance mission in support of the impending Operation Dragoon.

Though Saint-Exupéry himself did not live to see his book achieve the status of a modern-day classic, selling millions of copies annually and being translated into more than 250 languages and dialects, The Little Prince lives on in the hearts and minds of every reader it has ever captivated.