Today marks the 55th anniversary of the launch of Explorer 3, the second successful satellite launch by the United States.  Designed and built by the Jet Propulsion Laboratory (JPL) of the California Institute of Technology, it was a near duplicate of Explorer 1 in both its design and its mission.  Launched less than one year following Sputnik, the Explorer series performed a wide range of scientific missions and marked the official entrance of the U.S. into the Space Race.

JPL was founded during World War II using funds from the US Army.  Early research focused on developing guided missile systems for the war effort.  The technology developed at JPL during wartime eventually became tools for space exploration.

Well before the arrival of the desktop computer, women played an instrumental role in performing trajectory calculations at the Laboratory.  Barbara Paulson, a member of the JPL computing group, participated in the historic launch of Explorer 1, plotting the data received from the satellite and tracking station.  When electronic computers began plotting data in the 1970s, the group began writing computer programs for NASA engineers and developing computer-animation software.  The stories of the JPL computing group highlight the changing roles of women in science and technology. 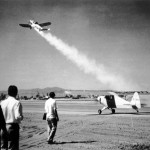 In an early test, a rocket-assisted airplane takes off faster and using a shorter runway than a propeller driven aircraft (still on the ground). Photo, JPL. 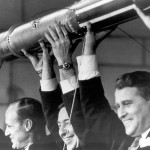 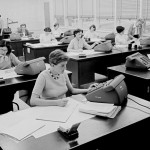 The JPL computing group, 1955. Barbara Paulson is on the telephone, standing back left. Photo, JPL. 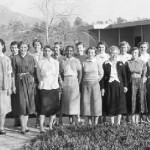