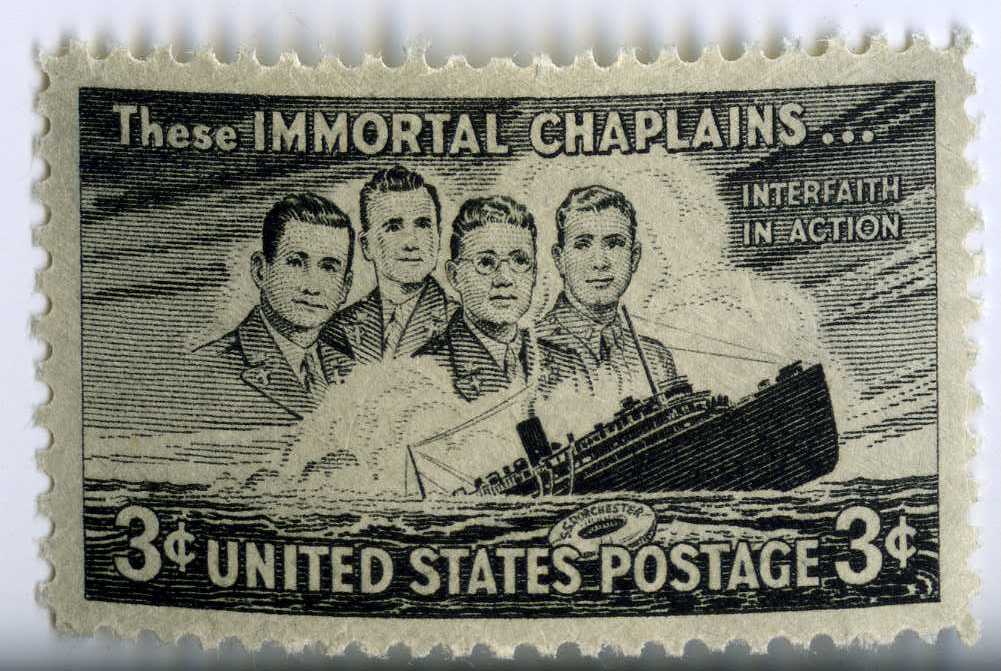 On 3 February 1943, the US Army transport Dorchester was struck by a German U-boat’s torpedo and sank within only 20 minutes. She was carrying 902 men, en route in a convoy from the United States to an Army Command Base in southern Greenland. On board were also four chaplains, who were termed the  “Immortal Chaplains” for their selfless actions and sacrifices they made in the cold North Atlantic waters. The four Army chaplains were Lt. George L. Fox (Methodist), Lt. Alexander D. Goode (Jewish), Lt. John P. Washington (Roman Catholic), and Lt. Clark V. Poling (Dutch Reformed). They remained a comforting and calming presence in the chaotic scene of the early morning sinking. Witnesses recall hearing their voices among the terror. The chaplains helped distribute life jackets until those ran out, and then they gave up their own jackets to others. Of the 902 men aboard the Dorchester, 230 survived and 672 perished. As the ship went down, survivors in nearby rafts recalled seeing the four chaplains, praying on the slanting deck with their arms linked.

Special Event – “Brotherhood and Sacrifice at Sea: The True Story of the Immortal Four Chaplains of WWII”

On February 3, 1943, a US Army transport, the Dorchester, was making its way in a convoy from the United States to an Army Command Base in southern Greenland. She was carrying over 900 men, but the Dorchester never arrived at its destination.

She was struck by a torpedo fired from a German U-boat, and the transport sank within 20 minutes.

On board the Dorchester were four chaplains who are now “immortal” for the selfless actions and sacrifices they made in the cold North Atlantic waters.

Join us on Thursday, February 28th to hear this harrowing, yet heroic, story from Judge Barry Sax, a retired Department of Defense Administrative Judge, historian and member of the Board of Directors of the Chapel of the Four Chaplains at the Philadelphia Navy Yard.

Following Judge Sax’s presentation will be a unique opportunity to hear from Richard “Dick” Swanson, who was aboard the USS Comanche, one of the Coast Guard Cutters that was a part of the Dorchester’s convoy. The Comanche rescued nearly 100 of the survivors and Swanson himself was later awarded the US Navy and Marine Corps Medal for Heroism during the rescue operations.

The event is free and open to the public, but registration is strongly encouraged.

Register for this event.

70th Anniversary of the German Defeat at Stalingrad SciTech Tuesday: Norman Heatley and the Tale of Two Mice