SciTech Tuesday: Thanks to Penicillin! 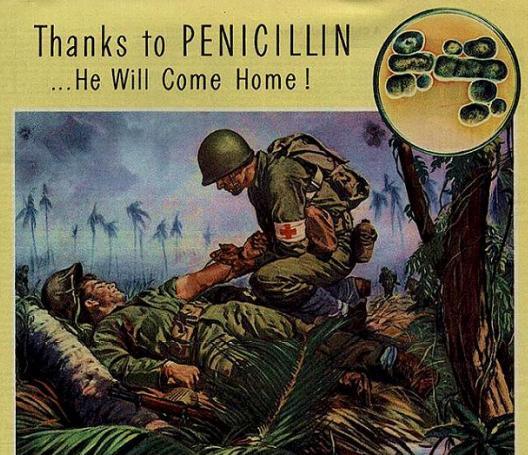 The final posting in a three-part series exploring the development and mass production of penicillin.

Reports of Howard Florey and his team successfully treating bacterial infections in mice drew great interest from both scientific and military communities.  World War II was well underway in Europe and the ability to combat disease and infection could mean the difference between victory and defeat.  Because British facilities were manufacturing other drugs needed for the war effort in Europe, Florey and his colleague, Norman Heatley, travelled to the United States in July of 1941 to continue research and seek help from the American pharmaceutical industry.  They convinced four drug companies, Merck, E. R. Squibb & Sons, Charles Pfizer & Co. and Lederle Laboratories, to aid in the production of penicillin.

Florey and Heatley ended up in Peoria, Illinois, to work with researchers who had perfected the fermentation process necessary for growing penicillin.  The researchers in Peoria used corn instead of glucose, or simple sugar, as the nutrient source, and the penicillin grew approximately 500 times more than it had in England.  The team searched for more productive strains of Penicillium notatum, finding the best specimen growing on an over-ripe cantaloupe in a Peoria grocery store.

Meanwhile, penicillin was used to cure the first human bacterial infection, proving to researchers the vital importance of the drug to save lives.  But, that one cure used up the entire supply of penicillin in the entire United States!  Following Japan’s attack on Pearl Harbor on December 7, 1941, it was clear to scientists and military strategists that a combined effort was needed to produce the large amounts of penicillin needed to win the war.  A total of 21 US companies joined together, producing 2.3 million doses of penicillin in preparation of the D-Day invasion of Normandy.  Penicillin quickly became known as the war’s “miracle drug,” curing infectious disease and saving millions of lives.

Sign Up as a Judge for National History Day The Road to Victory Brick Program: A Lasting Tribute