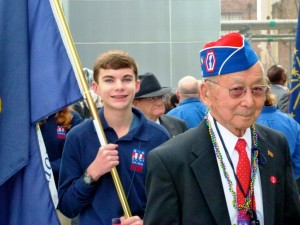 Seth Husney carries the Idaho state flag while escorting Colonel Jimmie Kanaya at the Dedication Ceremony for the US Freedom Pavilion: The Boeing Center

Seth Husney from Boise, Idaho was one of 51 students to take part in the Grand Opening of the US Freedom Pavilion: The Boeing Center. Seth earned his trip to New Orleans by writing an essay describing how Idaho contributed to World War II. Seth was paired with Colonel Jimmie Kanaya, a member of the 442nd Regimental Combat Team.  Seth also met Tuskegee Airman Captain Roscoe Brown during the event.

During last year’s National History Day, I was given the chance to enter the Salute to Freedom essay project.  This competition involved writing an essay detailing my state’s role in World War II. Being from Idaho, I wrote about Minidoka, an internment camp in southern Idaho and Mountain Home Air force Base.  After learning about both, I was proud of Mountain Home’s history.  I was sad about how my state and our country treated loyal Japanese American citizens in internment camps during World War II.

As part of the opening of the new US Freedom Pavilion: The Boeing Center, there was a procession with World War II veterans, and students, like me, who had been part of the essay contest.   I was fortunate to be paired with Colonel Jimmie Kanaya, a veteran from Portland, Oregon.   During the war, Jimmie had enlisted, and while he was serving, his parents were interned in the camp in Minidoka.  His wife Lynn Kanaya was born in that same camp in Minidoka.  It amazed me that while Jimmie was fighting loyally for his country, that same country was exhibiting the kind of racism he was fighting against.  Would you fight for a country that put your parents in an internment camp?

After the opening of the pavilion, those who were present at the ceremony were given a chance to tour the new exhibits. While exploring the historic warplanes of the exhibit, I had the chance to meet a Tuskegee Airman, Captain Roscoe Brown. After walking over to him, he put his arm around me, and asked me where I was from. When I said Boise, Idaho, he remembered details about Gowen field, an airbase outside of Boise, during World War II. He knew Jimmy Stewart had trained there, and he knew the exact length and width of the runway. I learned that the Tuskegee Airmen were not allowed in the officer’s clubs and German prisoners of war were.  Roscoe Brown was such a patriot that he fought for a country that treated him worse than the enemy he was fighting.  Would you fight for a country that treated it prisoners better than you?

People like Captain Brown and Colonel Kanaya, by rising above prejudice, set an example of greatness that we can all learn from.  I feel privileged to have been part of the Salute to Freedom and to have met, not one, but two great men.