SciTech Tuesday: The Return of the Twinkie

Two companies, Apollo Global Management LLC and C. Dean Metropoulos & Co, are reportedly close to a deal to purchase Twinkies from bankrupt Hostess Brands Inc.  Fans of the cream-filled sponge cake stocked up after Hostess announced its closure in November.  Twinkie production began in 1930 when baker James A. Dewar realized that machines used to make strawberry shortcake could be used to make other snack cakes when strawberries were out of season.  First made using banana cream, the filling was changed to vanilla cream in response to banana rationing during World War II.  Sales of vanilla-filled Twinkies soared, resulting in the Twinkie we all know today. 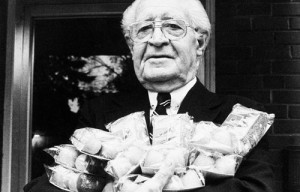 James A. Dewar, inventor of the Twinkie.

Join us for The National WWII Museum Robotics Challenge!