A New York Student Honors Her State and WWII Veterans

High school student Sarah Jones of Schenectady, New York represented her state during the Grand Opening of the US Freedom Pavilion: The Boeing Center. She honored on of her state’s contributions to World War II with a photo essay on the American Locomotive Company’s production of tanks and locomotives. After returning to New York, she composed a brief essay on her experience.

There’s a photo of me after receiving the Salute to Freedom Award at National History Day 2012. I had the biggest smile on my face. Because of this award, I got to attend the Grand Opening of the US Freedom Pavilion at the National WWII Museum. This is one of the greatest honors I have received and it created some of the best memories of my life.

We arrived on Thursday and went right to the museum. When we got to the Louisiana Memorial Pavilion, everyone was so happy to see us. The staff was incredibly hospitable and helpful. I felt almost like a rock star. The best part of that day was getting to meet two WWII veterans, Captain Don Summers and Bob Bannon. It’s one thing to read about the war, but when I talked to them, they made it seem real. Later on my visit, I also had the honor of meeting Bert Stolier, a Pearl Harbor survivor, and Tom Blakey, a D-Day paratrooper.

On Friday, I set about my great mission, reading every exhibit in the museum. Ah well, I came close, but no cigar. I later realized that this was a herculean task to perform in just three days. Throughout Friday, I noticed other Salute to Freedom students, who I would later know as Becka from North Carolina and Ruby from New Mexico. That night, I met them face to face, and also met Laura from Connecticut, Thomas from Colorado and Christian from Oregon. It was so cool to meet other kids who loved history. Later, we made an appearance at the Black Tie Gala. When we walked into the Freedom Pavilion, despite the beautiful gowns and dashing tuxedos of the attendees, none of us could keep our eyes off of the planes hanging from the ceiling. 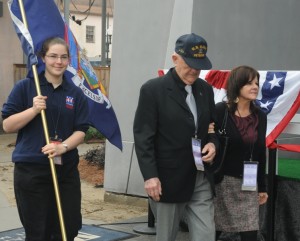 My Saturday began at 6am. The students marched off to the museum at 7:30am. Once we got there, most of us fidgeted next to our chairs, waiting for the veterans we would be escorting to the ceremony. Soon, I met Ernest LeBlanc, who served in the Pacific during WWII and his daughter. Both native New Orleanians, they immediately wanted to know what I had eaten. I told them about our excursion to Cochon, and the AMAZING rabbit and dumplings. They told me that I desperately needed to try a Po Boy. It seems like seconds later that I was marching outside carrying my state flag and smiling like I had won the lottery. The rest of the ceremony was a daze; I was overwhelmed with all of the history around me.

Being a part of the ceremony was such an honor, and so infinitely cool. I loved the museum, and the WWII vets. I got my photo taken with Tom Brokaw, which was awesome. Thank you to The National WWII Museum and a huge thank you to Nathan Huegen who seemed to be everywhere at once, making our visit rich in both history and hospitality.

A Special Meeting in Shreveport, LA SciTech Tuesday: The Return of the Twinkie