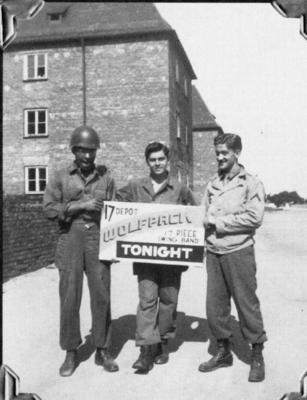 Today, a day shy of his 92nd birthday, pioneering jazz pianist and band leader Dave Brubeck passed away.  Brubeck was one of post-war jazz’s great innovators, bringing improvisation and unusual and often challenging time-signatures and folk rhythms into the mainstream musical vernacular.  His 1959 opus, ‘Time Out,’ became the first jazz album ever to sell over a million copies.  However, before the million-sellers, Brubeck was merely one of over 16 million Americans who found themselves serving in WWII.

Completing college in 1942, the 23 year-old Brubeck was drafted into the Army.  Qualifying as a sharpshooter, Private Brubeck arrived in France ninety days after the initial D-Day landings as a replacement in A Company of the 140th Infantry Regiment of Patton’s Third Army.  Advancing rapidly, Brubeck’s unit was informed that they would likely see action soon.  It was in this instance that Brubeck’s life was altered.  Brubeck remembered in an interview for Ken Burns’ 2000 documentary, ‘Jazz.’

‘They said you know you’re going to have to be at the front soon, but tonight there’s going to be some girls come up and entertain you, Red Cross girls, so they had a piano on the back of the truck, where the side of the truck came down and made a stage, and they asked over their loud speaker, ‘Is there a pianist that will come up and play with, for us, because we need a piano player.’ So, I finally raised my hand. I remember I was sitting on my helmet, in a place called ‘The Mudhole’, and I went up there and a Colonel heard me play and he said, ‘This guy shouldn’t go to the front. We want to keep him here and form a band.’  We formed a band of two guys that were with me, that hadn’t been to the front and the rest of the guys were guys that had been to the front and been injured, shot and they would send them to me. My Wolf Pack Band was mostly guys that had the Purple Heart, we could play right at the front line because the front line troops, when you’re just ready to go into battle the USO doesn’t usually getup that far and if they did they wouldn’t be accepted as well as seeing guys that have already been wounded.

And that’s the way we did a lot of the rest of the war.’

Brubeck and his Wolf Pack Band (two members seen above), officially designated as the Third Army Replacement Depot Jazz Band, would, for the next two years, serve as entertainment on the front line and in the rear for Allied troops and later for the American occupying forces in Germany.  The Wolf Pack Band was also notable for being the first racially integrated military band in American service.

Discharged in 1946, Brubeck returned to his home state of California to further hone his inimitable personal style; a style most certainly shaped by his experiences serving in the Second World War.