The Eve of St. Mark Premieres on Broadway 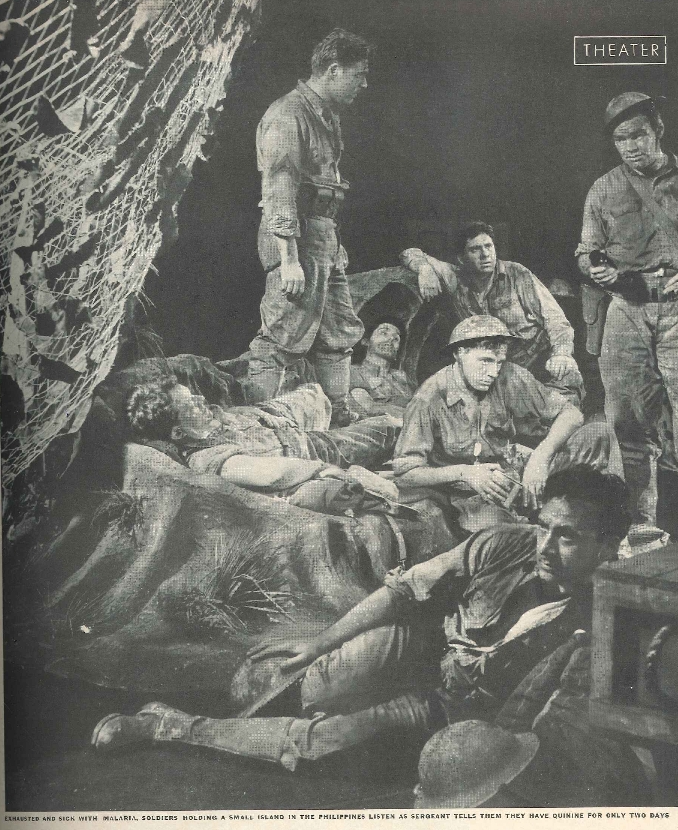 A view of the players of The Eve of St. Mark from a review in the 19 October 1942 issue of LIFE magazine. Its caption reads, "Exhausted and sick with malaria, soldiers holding a small island in the Philippines listen as sergeant tells them they have quinine for only two days." Gift of Marian C. Lifsey, 2002.195

On 7 October 1942, Maxwell Anderson’s two-act play The Eve of St. Mark, premiered on Broadway. Two years after its stage premiere—and once the play’s 307 show run was over, per Anderon’s directives—The Eve of St. Mark was also made into a 20th Century Fox film starring Anne Baxter and Vincent Price, in addition to many of the original stage actors.

The play’s title was inspired by John Keat’s poem of the same name. St. Mark’s Eve, celebrated on 24 April, is a day full of superstitions. In some faiths in some churches, it was believed that if one stood vigil at the church’s doors overnight, you would see the ghosts of those who were going to die in the coming year.

The title is appropriate, as—spoiler alert!—the play’s protagonist, Quizz West, finds himself serving in the Philippines on 24 April, the Eve of St. Mark, when West’s unit is clearly becoming overwhelmed by the enemy. The play reflected the reality that the Japanese had attacked the Philippines in 1941, and had succeeded in pushing American and Filipino forces into a retreat, as they suffered heavily from illness like dysentery and malaria. While asleep and dreaming, Quizz speaks with his mother and his sweetheart, asking them for guidance in his struggle with whether to stand strong knowing he will be sacrificing his life, or to retreat knowing that doing so will cost the lives of his brothers in arms. See the 1944 film to find out which path West chose…