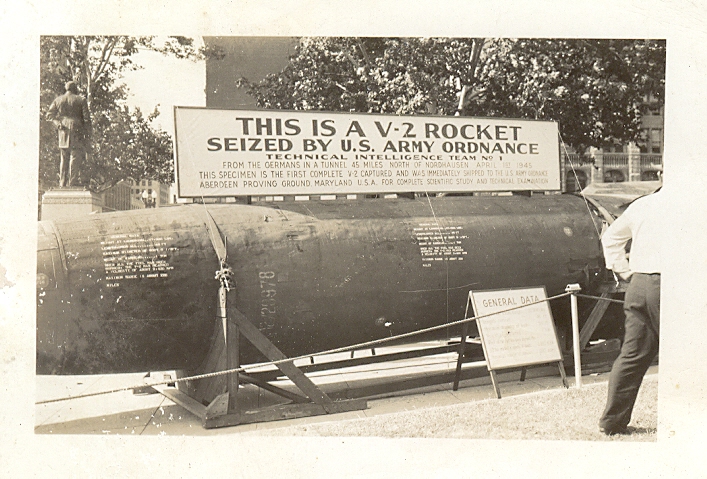 The sign above this captured V-2 reads, “This is a V-2 rocket seized by US Army Ordnance Technical Intelligence Team No. 1 from the Germans in a tunnel 45 miles north of Nordhausen April 1st, 1945. This specimen is the first complete V-2 captured and was immediately shipped to the US Army Ordnance Aberdeen Proving Ground, Maryland, USA for complete scientific study and technical examination.” Gift of Thomas E. Hall, 2007.292.011

On 3 October 1942, a team led by Walter Dornberger and Wernher Von Braun tested the first V-2 rocket at a facility at Peenemünde, near the Baltic Coast. Dornberger remarked, “This third day of October, 1942, is the first of a new era in transportation, that of space travel…” An interesting comment considering Von Braun would later be charged with crimes against the state for wasting time with the “frivolous” idea of space travel. He was released and eventually he and Dornberger defected to the US.

After the war, parts of numerous captured V-2 rockets were reassembled in the US for testing. The resulting research has been called the “birth of both space-based astronomy and the US Navy’s space program. “

Dinner with a Curator Fall Fun in the Victory Garden