Widely used during World War I, the homing pigeon, or carrier pigeon when relaying a message, returned to service in the European theatre during WWII.  Despite the development of the radio to transmit voice messages, the carrier pigeon was a desirable alternative for communication while maintaining radio silence and obscuring the position of the sender.  Additionally, homing pigeons carrying cameras provided discrete surveillance of German activities.

Get more information about the role of carrier pigeons during WWII.

Homing behavior is the unique ability of animals to return to an original location such as a nest or territory.  A variety of vertebrate and invertebrate species utilize homing abilities, including honeybees, sea turtles, salmon, newts, limpets, and many species of birds.  Pigeons use internal compass mechanisms paired with a highly developed hippocampus, the region of the brain controlling spatial reasoning. 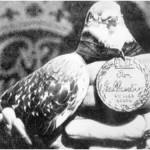 The celebrated war pigeon, G.I. Joe, receiving the Dickin Medal for gallantry during WWII. His swift delivery of a message to Allied bombing forces saved over 1000 lives of British troops and civilians in the Italian village of Calvi Vecchia. 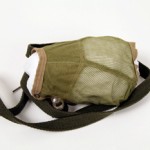 This pigeon vest was used by paratroopers and Signal Corps men to transport one pigeon. The message capsule was attached to a pigeon’s leg for safekeeping during flight. The National WWII Museum, Inc. 2006.121

Battle of Alligator Creek…or Tenaru River? Or was it Ilu? Brazil Declares War