Today marks the 70th anniversary of what many consider a disastrous raid on the German-occupied port of Dieppe, France. The codenamed Operation Jubilee was designed by British Admiral Lord Louis Mountbatten, the Chief of Combined Operations who saw unexpected success with the commando raid on St. Nazaire earlier in 1942. In an atmosphere of continued Allied losses from Singapore to Malaya to the Dutch East Indies, in addition to Josef Stalin’s perpetual insistence that the western Allies do something to draw off German troops from the Eastern front, a raid on Dieppe seemed a fair compromise to raise Allied morale and reassure the Soviets that the British, Canadians, and Americans were doing all they could at that moment.

An attack force of 6,000 men made up of approximately 5,000 Canadians, 1,000 British, 50 US Army Rangers, and a dozen or so Free French fighters reached the shores of Dieppe at around 0500 hours on 19 August 1942. The operation had been repeatedly postponed due to poor weather, and it is likely that the lost time allowed the Germans to surmise an attack was coming. Luftwaffe reconnaissance surely saw an upsurge in amphibious vehicles off the coast of England, and to a lesser degree the anxious men who were to make the raid may have suffered from a bad case of loose lips. The Germans’ preparedness for the Allied landing that morning certainly suggests they knew what was coming.

In addition to heavy firepower and coastal defenses on the beaches, the Allied force suffered its own shortcomings. Pre-invasion bombardment had been planned on from the beginning, but was canceled due to the fear of harming French civilians. The Churchill tanks—which were not designed as amphibious vehicles but were used as such regardless—accompanying the landing force were essentially rendered useless once they hit the gravel beaches and the high seawall. Most were quickly knocked out, thereby stripping the infantrymen of armored support.

Less than six hours after landing, the Allied force called a retreat to which only 3,000 or so men responded. More than 900 Canadians and 260 British commandos were killed in action, and the remaining 2,100 Allied troops who survived were either wounded or captured. A hefty arsenal of weapons was lost on the beaches, which had the adverse effect of providing the enemy with a close-up study of Allied weaponry. Of the 50 US Army Rangers who partook in the raid, three were killed including Lt. Edward Loustalot, a Louisiana native, who was the first American to be killed in action by German forces in ground combat in Europe.

The Dieppe Raid was a costly loss for the Allies, and referred to by some as a massacre. However, the operation was intended as a test run for the eventual massive invasion of occupied France. The idea of Mulberry Harbors, for example, was a result of the evidence gained at Dieppe that an invading force would not be able to penetrate the Atlantic Wall and capture an occupied port. It was made clear as well those amphibious vehicles needed vast improvement. Though none of the raid’s goals were met and hundreds sacrificed their lives, the battle at Dieppe arguably saved hundreds or thousands of lives on D-Day at Normandy less than two years later by providing harsh but necessary lessons. As Admiral Mountbatten put it, “For every soldier who died at Dieppe, ten were saved on D-Day.” 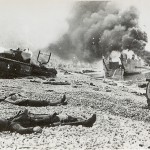 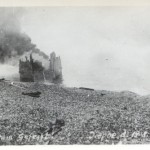 Gravel beaches made the use of Churchill tanks nearly impossible. Gift of James Moorman, 2002.439 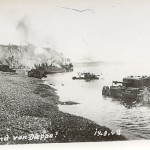 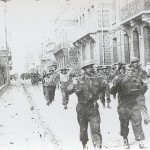 Only half of the raiding force returned home; the rest were killed, MIA, or taken prisoner. Gift of James Moorman, 2002.439 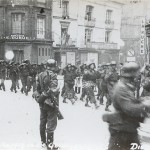 Hundreds of Allied prisoners of war are marched through Dieppe. Gift of James Moorman, 2002.439 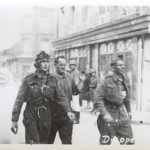 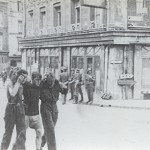 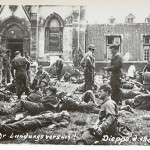 Allied prisoners of war take a breather after the disastrous battle. Gift of James Moorman, 2002.439 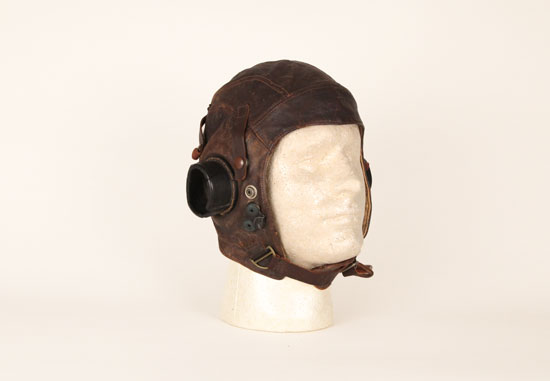 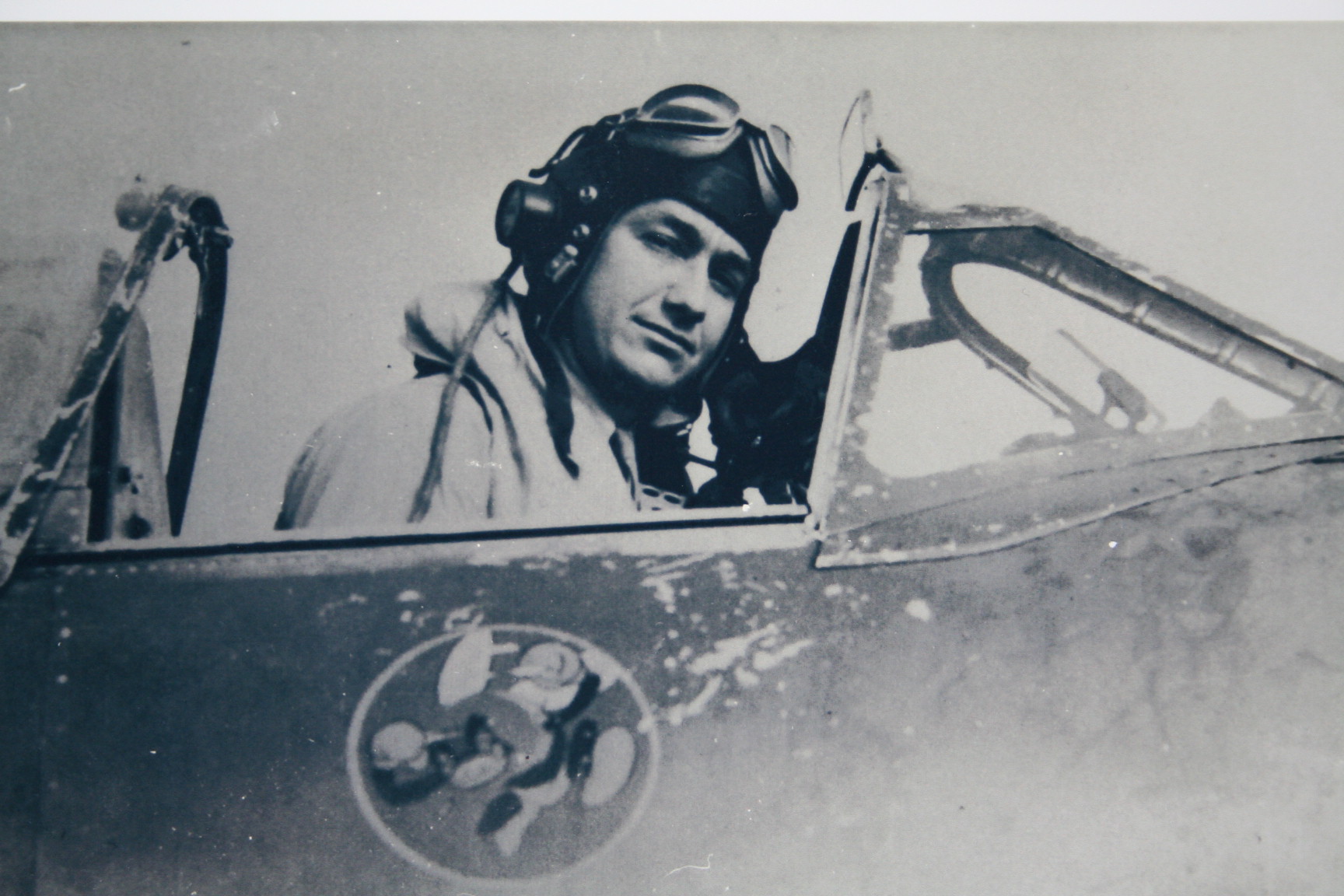 Captain LaBreche in his flying helmet. Gift of Jerrye LaBreche, 2005.003

Though the fifty US Rangers who participated in the Dieppe Raid are perhaps the more well known of Americans in that mission, a few US airmen were in the skies overhead as well.

Capt. George J. LaBreche of the US Army Air Force flew his first combat mission as commander of the 307th Fighter Squadron,  31st Fighter Group of the 8th Air Force. One of the first units sent overseas to England, the 307th flew out of the Royal Air Force base at Biggen Hill. Later that summer, as overhead support for the Dieppe Raid, Captain LaBreche led the first US sortie in British Supermarine Spitfires–with US markings–instead of the P-39s they had trained on (they had since been deemed unsuitable for the unit’s purposes). LaBreche’s 31st Fighter Group was the US Army Air Force’s sole participant in the Dieppe Raid.

Less than three months later, LaBreche flew in support of Operation Torch where he was shot down, making a crash landing. Captain LaBreche made his way back to his airfield and continued combat flight operations without interruption. In one of his last missions in 1943 Captain LaBreche escorted British Prime Minister Winston Churchill’s aircraft in the North African theater.

Archival Footage of the Raid